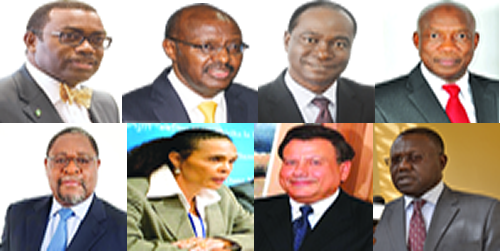 It’s crunch time for the eight hopeful aspirants to the highest office of the African Development Bank, as incumbent President, Dr Donald Kaberuka, a Rwandan, clears his desk in preparation for the inevitable chore of seeking further fortunes elsewhere.

The race for the top job of the 51-year old institution is a high-stakes intrigue-filled affair that pits African member-countries against each other, reflecting individual politico-economic interests as well as nuanced sub-regional affiliations.

Since the winner must achieve a double-victory – highest African votes plus total votes – contestants have been on a frenzied international charm offensive selling their candidatures to the eligible voting 53 member countries and 25 non-member countries of the Bank. The outcome of their efforts is likely to be evident at this year’s annual meetings, if a deadlock does not force a post-meetings run-off like the elections that produced Dr Kaberuka 10 years ago. The intriguing thing is that, like in most elections, the best candidate doesn’t necessarily win. The happy news is that all the eight candidates are eminently qualified to lead the Pan-African Bank.

The eight contestants have been making known reasons for putting themselves up for the job and have published vision statements detailing their dreams for the pan-African development institution. Voters have by now almost made up their minds leaving room for their last minute horse-trading, should their candidates show signs of not making the cut in the early rounds.

A close look at the field reveals that all but two of the aspirants are/were government ministers; five currently hold the finance portfolio. This means that they are all probably well known in the international financial circles and are familier faces to most of the voters. The two are not exactly unknown either. The Zimbabwean, Thomas Sakala is the AfDB’s former vice-president, while, Birama Boubacar Sidibe, a Malian and former AfDB insider, is Vice-President, Islamic Development Bank.

Experience teaches that nothing is certain as far as the AfDB elections are concerned. Analysts can only make informed conjectures, which are often upturned by the dynamics of realpolitik.

Nigeria’s Minister of Agriculture and Rural Development Dr Akinwumi Adesina will start out strong fortified by the country’s massive 9.3% voting shares (making up 16% of Africa’s 60% of the total). The Nigerian candidate will also ride on the country’s indignation that it has not been given the opportunity to head the institution despite its pioneering efforts in the establishment of the institution and its status as the highest single shareholder and benefactor (it funds the NTF) in the Bank’s over five decades of existence. He will also be helped by his personal qualities as a brilliant bi-lingual, easy-mixer who has lived and worked in many African countries. Dr Adesina won the prestigious Forbes Man of the Year Award (2013), in recognition of his achievements in Nigeria’s agriculture sector, and that should count for much.

Dr Kamara’s incomparable breadth of experience as a former central bank Governor, one-time award-winning Finance Minister and currently Foreign Affairs Minister, quite apart from his stint at the Commonwealth and the IMF makes him a formidable contender, if qualification and experience of development issues are central in the elections. This is reflected in his vision statement. His current portfolio of Minister of Foreign Affairs and International Cooperation of his country has afforded him a useful platform for meeting and reaching out to many of the non-regional member-countries’ officials and representatives. He may be able to parlay this into their endorsement early in the race, to shore up his country’s low voting shares. While serving as Sierra Leone’s Finance Minister, Dr Kamara’s “pull power” did not surprise his close contemporaries when he was unanimously chosen as the chair of the African Finance Ministers’ Caucus at the BrettonWoods Institutions. The veteran economist easily got his peers’ thumbs-up with his natural instinct for inclusiveness.

Nor did the affable consensus builder disappoint. He went on to organize a memorable meeting of the Caucus in Freetown, his country’s chief city where virtually every one of his peers showed up and testified to having had fruitful deliberations and a wonderful time. That same organizational skills and the natural ability to bring people together may serve Dr Kamara well in the imminent elections.

Ethiopia’s Finance and Economic Development Minister Sufian Ahmed is another solid candidate. As Africa’s longest-serving Finance Minister, it would be trite to say that he may enjoy the greatest goodwill as the Dean of Africa’s Finance Ministers. Mr Sufian’s over two decades in the service of his country easily sets him up as a stable and reliable candidate. Mr. Sufian’s disciplined and Spartan life-style stands out in a continent where indiscipline appears to be the norm.

Mr Sufian’s selling point is unassailable. He has had direct dealings with the African Development Bank for 20 unbroken years, which made his country’s relationship with the Bank, arguably, one of the most mutually beneficial in the institution’s history.

It is easy to see why Mr Sufian is convinced that he knows enough of the Bank, perhaps, more than any other government official. His knowledge, stemming from close association by virtue of his position as a veteran Governor and Board member of the institution, gives him the rare insight only he can have from his vantage point. Little wonder his vision statement, which goes directly to the very essence of the Bank’s raison d’être, is considered one of the most lucid, coherent and socio-economically relevant to the Bank’s mandate. Sufian’s years of experience surely stands him out.

Tunisia’s Mr Jaloul Ayul, a former Finance Minister who now heads a commercial bank in his home country, also has his hat in the ring. He may benefit from the fact that his country hosted the Bank in its difficult years when it had to relocate, owing to the crisis in Cote d’Ivoire. But then, that same fact could count against him and fluff his chances, particularly since a Tunisian had previously headed the Bank.

Cape Verde’s candidate Cristina Duarte has a lot going for her. She is the only woman in the melee and the first of her gender to ever vie for the job. She is also a Finance Minister with cognate private sector background and the first Lusophone to ever be in the Bank’s leadership race. She reportedly speaks four languages, to wit, English, French, Portuguese and Italian, besides her native caboverdiano.

She may coast home on the advantage of presenting the Bank’s stakeholders the opportunity to walk-the-talk of gender equality which has been one of the institution’s favourite policy prescriptions over the years. Moreover, the non-regional member countries, especially, may be drawn to her camp on the foregoing sentiments, given that her small island country’s voting shares are among the least and definitely need shoring up.

Everyone of the three remaining contestants was a former AfDB employee. This means that each will endeavour to put to good use inside knowledge of the workings of the Bank and hope that voters will take notice. Of the three, however, only Chad’s Dr Kordje Bédoumra, who rose to the post of Vice President at the Bank, currently holds a government job: Minister of Finance and Budget. His varied experiences at the Bank as well as the hands-on involvement in policy issues in his country greatly enhance his candidacy.

The second AfDB former staffer, Birama Boubacar Sidide is a Malian who is currently Islamic Development Bank’s Vice-President (Operations). His stint at the AfDB no doubt contributed to his fortunes at the IsDB without prejudice to his time as Managing Director of Shelter Afrique, in Kenya. A result-oriented performer, Mr Sidibe now hopes that the combined experience at the three development institutions stand him in good stead to clinch the AfDB top job.

And then there is Thomas Sakala, a Zimbabwean who put in 31 years at the Bank, topping out as Vice-President, Country and Regional Programming. He, like his counterparts and former colleagues at the Bank, banks on his extensive knowledge of the institution and regional member states to see him through. Sakala is thought to be the Southern African Development Community’s (SADC’s) candidate and may benefit from a block voting from members of that sub-region, at the preliminary stages. Some analysts worry, however, that his Zimbabwean citizenship could work against him as far as the Western non-regionals are concerned for Mugabe-related reasons. But again, that may fizzile-out at the elections.

The AfDB election, being of an international dimension, has so many moving parts that projections and forecasts are just shots in the dark. The 2015 race promises to produce as much, if not more drama than the 2005 elections that threw up Dr Keberuka. Moreso, having graduated into the over – $100 billion institution, the stakes are today much higher.

Candidates, this time round, will be navigating an obstacle course that challenges each one’s strengths and weaknesses in academic, management and social skills, linguistic and sub-regional affiliations, links and influence in the wider international community.

So who gets the final nod? Anyone keen on a roll of the dice?