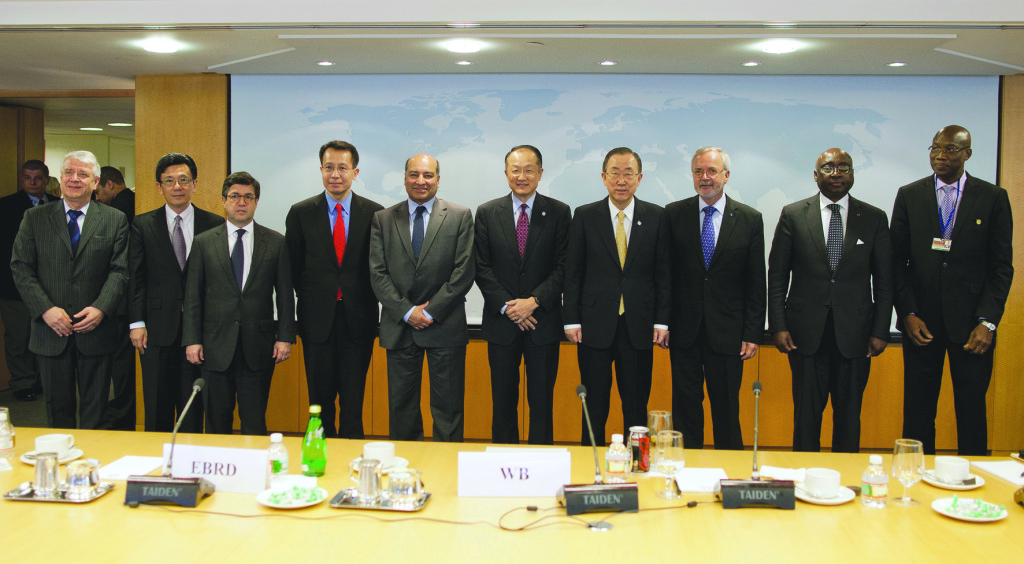 Some analysts consider their advent most auspicious for the global economy, coming in the fading days of the turmoil occasioned by the global financial crisis and the attendant economic depression of the past half-decade. If all goes well, the new entrant into the multilateral financial arena will, they say, reduce the world’s dependence on older institutions and ipso facto increase resources available to needy countries desperate for development assistance and sustained growth.

The BRICS Bank, the promoters say, will give emerging and developing economies access to resources for infrastructure and sustainable development projects. The World Economic Forum reckons that the spending on basic infrastructure — transport, power, water and communications — amounts to $2.7 trillion, one trillion short of the $3.7 trillion needed to keep the world running well.

United Nations Economic Commission for Africa and the African Development Bank (AfDB) estimate that Africa faces an annual funding deficit of $31 billion for electric power alone. South Asia’s economy, in spite of the tremendous growth recorded in the most of the past decade, needs to invest as much as $2.5 trillion in the next 10 years to build infrastructure necessary for reducing poverty.

Economists are all agreed that these gaps take a toll on growth. It is claimed, for instance, that inadequate power supply, poor health and transportation facilities have impeded South Asia’s manufacturing sector for growing as fast as once expected. The same, obviously, is true of Africa. Little wonder that the (AfDB) devotes over 50 percent of its resources to infrastructure development on the continent.

The promoters of the new institutions leave no one in doubt about the motivation for establishing another set of development agencies in an increasingly complex world. Like many critics and unsatisfied clients of the world’s twin premier financial institutions, the economic grouping has expressed its “disappointment and serious concern” at their deliberate foot-dragging over reforms required to make them function better. They write off the Bretton Woods Institutions as having lost their “legitimacy, credibility and effectiveness”.

They are not alone in their deep distrust of the older institutions. Set up 70 years ago just as the last flares of World War II were dying out, the twin pioneer institutions had the mandate of 44 nations to evolve, in the words of Dominico Lombardi and Harold James, “an institutional structure that would underpin global stability and prosperity”.

Incidentally the United Nations was soon after created to help forge unity and understanding among the nations of the world, its predecessor, the League of Nations having utterly failed. These institutions were established, ostensibly, to make the world a safer, better place, where the benefits of the earth’s resources are available to all nations. Over time, more such institutions were conceived and born around the world to cater to regional needs including the European Bank for Reconstruction and Development, the African Development Bank, the Asian Development Bank and a host of others.

In the past three decades or so, development scholars have more or less agreed that multilateral institutions are failing to live up to expectation, especially as far as helping to drive growth in developing economies in spite of their clear mandate and their posturing to be doing so. The Bretton Woods institutions have taken the most flak and been buffeted by charges of insensitivity to the yearnings of the very countries they were set up to assist.

The institutions’ most ardent supporters even concede as much when they openly agree that they were truly effective for only three decades after their inauguration, i.e. till the early 1970s. In that period, they were mostly concerned and pre-occupied with rebuilding Europe and Japan, which were devastated during World War II.

So much has been said about the inappropriateness of the “Washington Consensus” policies which impose stringent conditions on developing countries in Africa, Asia and Latin America seeking assistance irrespective of their level of development or peculiarities of their economies. Action Aid International’s Sameer Dossani lists fiscal and trade liberalization, privatization and budget austerity as some of the impositions that made nonsense of all such assistance.

In fact, he, like many other global economy watchers, notes that the “period from 1980-2010 recorded little or no growth globally.” Only countries such as China, Malaysia and Singapore that ignored World bank/IMF policies recorded successes. They achieved growth through home-grown, state-backed borrowing and investment which drove industrial policy.

Thus rather than grow, assistance recipients’ economies were further impoverished by the wrong-headed policies of the premier multilateral institutions. Things were so bad for them that many got entrapped in what Zambian economist Dambisa Moyo termed odious debt. Global condemnation of the untenable situation inexorably pressured the Bank and Fund to spear-head the debt forgiveness and write-offs of the last decade.

Today, global economy analysts and watchdogs hope that the BRICS Bank and other institutions wishing to join the league of multilateral institutions do not follow the unpopular and wrong foot-steps of the pioneer institutions.