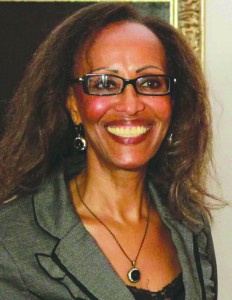 Dr Mulu Ketsela is Executive Director for East Africa at the African Development Bank. With a PhD in Economics, Dr Ketsela has had an extensive career as senior government official in Ethiopia, including as economic advisor (with ministerial rank) to the President of Ethiopia, and subsequently, as economic advisor to the Prime Minister of Ethiopia.

She was also a board member of the Development Bank of Ethiopia and the Ethiopian Road Authority. Between 2001 and 2005, she served as a State Minister of the Ministry of Finance and Economic Development of the Federal Democratic Republic of Ethiopia. She has worked as economic consultant and as expert in various international organisations, including the UNDP (United Nations Development Programme) in New York and Geneva. She has also taught economics to undergraduate students at the College of New Rochelle and New York University for a number of years.

In the discussion with AnnualMeetings Dailyexcerpted below, she speaks on how the Bank is assisting her constituency in critical sectors, particularly in infrastructure and its contribution to regional integration. She also touches on the efforts of the AfDB president to put the Bank at the centre stage globally.

How would you assess the activities of the AfDB in your constituency in the last one year?
Energy supply continues to be one of the major challenges for most of the countries in my constituency (Uganda, Ethiopia, Eritrea, Kenya, Rwanda, Tanzania and Seychelles), in which they continue to suffer from frequent outages with the majority of the population lacking access to energy. The same applies to the transport and water and sanitation sectors — with most people lacking access to safe water and basic sanitation. Lack of infrastructure is literally costing most African countries, including those in my constituency, nearly two percent growth rate every year.

Therefore, since most countries in my constituency lack basic infrastructure such as energy, road, water and sanitation, railways, et al., which are critical to sustaining economic growth and development of their economies, the Bank continued to emphasis on infrastructure development during 2013. The amount of loans and grants allocated by the Bank to these countries reflected these priority sectors. For instance, during the year (2013), 43% of the Bank’s total allocation to the East African countries, including the seven countries in my constituency, went to the transport sector, and this was followed by energy (26%), and water and sanitation 11%. In a nutshell, the Bank has been able to address the priorities of these countries.

I believe the Bank has continued to improve the way it engages with all its member-countries including those in my constituency (Uganda, Ethiopia, Eritrea, Kenya, Rwanda, Tanzania and Seychelles). The ongoing decentralization process, where the Bank is assigning qualified staff in the Regional Resource Centers (RRCs) and the field offices, is a further testimony to its determination to enhance and improve the delivery of services to its clients. The consultation missions I undertook to the countries in my constituency in recent months have enabled me to witness first-hand, the notable changes and improved engagements between the authorities and Bank staff. These countries are taking the Bank much more seriously. They now see it as a reliable development partner, capable of playing an important role in engaging policymakers in their pursuit to design appropriate development policies and strategies for their countries. The Bank is playing a leading role in critical sectors, particularly, in the area of infrastructure.

The East African region which comprises 13 countries (including the seven countries in my constituency) leads with respect to the allocation of resources by the Bank during the year, followed by the Western and the Southern African regions. It is very important for the Bank to review its resource allocation policy to effectively address the resource needs of all its members, including those in my constituency. This is exactly what has been proposed by the Bank.

In what area should the Bank increase its intervention in your constituency?
I believe that the Bank should continue to intensify its intervention in the infrastructure sector—to contribute to the efforts of countries in the East African region to reduce their infrastructure gap. The Bank should also promote more vigorously the diversification of their economies, obviously by helping them to improve the management of their natural resources, building the requisite skills, and actively promoting industrialization and competitiveness. In addition to building the physical aspect of infrastructure, the Bank has to also do more on the softer part of infrastructure.

Kindly give us an update on the relationship between the AfDB and your constituency?
For financing purpose, the AfDB classifies most of the countries in my constituency as countries that could only access resources from the ADF-window for their public operations. And currently, Seychelles is the only country in the constituency, which is eligible for the ADB-window to finance its sovereign operations.

The countries recognize the huge efforts made by the Bank to attain a successful ADF-13 replenishment that would contribute to sustained economic growth and the reduction of poverty, while at the same time advancing the transformation of the continent. They appreciate the Bank’s contributions to the development of infrastructure and regional integration on the continent. They also commend the Bank’s decision to introduce innovative financial instruments, such as the ADF Partial Credit Guarantee (PCG) and the Private sector Credit Enhancement Facility (PSF) will could help in leveraging the limited ADF resources and address the needs of member-countries for more resources. There is no doubt that these initiatives will help to attract private sector resources.

As I said earlier, given the huge resource needs of most countries in my constituency, reviewing the credit policy of the Bank through taking the prevailing global environment will provide more opportunities for countries that are considered credit worthy to access resources from the ADB window. This will enable countries currently classified as ADF-only to access non-concessional resources for their sovereign operations.

How would you assess the leadership of Dr Kaberuka?
Mr Kaberuka has made concerted efforts to put the AfDB at the centre stage globally. We hear leaders at various international fora citing the initiatives of Mr Kaberuka and that of the AfDB. For instance, the proposal to establish the Africa50 Initiative, an innovative financing instrument for infrastructure development in Africa, is one amongst the various efforts and initiatives made by him in 2013. Without putting in place an entity capable of mobilizing additional resources from various players—including from public and private players, it will be difficult to tackle the challenges associated with the infrastructure deficit of the continent. Mr Kaberuka has played an important role in working with key African institutions, notably the African Union, the ECA and other major African and non-African stakeholders to ensure that the needs and concerns of the continent—and most importantly, the needs of the population at large, are explicitly taken into account in most Bank’s operations. I have no doubt that the establishment of the Africa50, and its effective implementation, will contribute to narrowing Africa’s infrastructure gap.