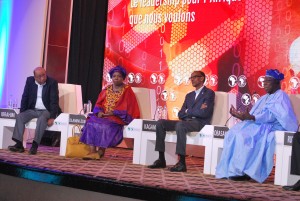 “The fault, dear Brutus, is not in our stars, but in ourselves”. — William Shakespeare; Julius Caesar

In a rare display of soul-searching candour, humility and statesmanship bordering on self-flagellation, the distinguished panel of African leaders at the “Leadership” seminar at the African Development Bank meetings touched off what may be the brave new way forward for Africa, as the continent contemplates the next 50 years of existence.

How did Africa get it all wrong after the euphoria and the great expectation that trailed the attainment of independence in the early 1960s?

Former Tanzanian leader Benjamin Mkapa who reeled out those immortal lines of Shakespeare may not have teed off the discussion, but his emotion-laden contribution defined the entire session.

Panellists and audience alike, were carried away in an emotional roller-coaster that whizzed everyone from the highs of delirious laughter to the lows of reflective contemplation, thanks to the effervescence of Chief Olusegun Obasanjo, former president of Nigeria and Mo Ibrahim; the philosophical depth of President Paul Kagame of Rwanda, and Thabo Mbeki, former president of South Africa; the gender-balancing views of Dr Nkossana Dlamini Zuma; and of course, the youth’s perspective supplied by Kenya’s Vice President William Ruto.

Mkapa’s pulled no punches.  “African leaders are extremely selfish,” he volunteered, “concerned about here and now, in the seat (of power); more in love with their political parties than the population they purport to serve.”

Scathing as that sounded, the Tanzanian leader actually built on an earlier blow delivered by Mbeki, who drew the first blood by challenging leaders to insist on “a critical self-assessment of ourselves as Africans”.  The former South African President noted that “we’re afraid of speaking frankly to one another about the wrong we’re doing”.  He longed for the day one leader would say to another in the spirit of NEPAD, “You are stealing public resources meant for development of your country”.  Touché!

The session did not start on this blistering note though.  Former President Obasanjo, in his characteristic jolly element, had drawn guffaws all around when he stunned the moderator with a sharp “why me?” when asked to lead the discussion by taking the first shot at the microphone.

Businessman and Philanthropist Mo Ibrahim drew more laughter by going straight for Africa’s ageing leaders who, notoriously, refuse to quit the scene in favour of the younger generation of leaders with fresh ideas.  “Some are 90 years old, and are just starting new terms in office. We’re the world’s laughing stock. You guys must be crazy, they say. Where do they want to lead the continent? To the grave?”

The outspoken private sector giant would later clarify that he had nothing against age.  He only wanted the youth to be better engaged in the quest for good and sustainable leadership for his beloved continent.  After all, his Mo Ibrahim Foundation instituted the Prize for Achievement in African Leadership to encourage African Heads of State to eschew corruption. He remains a foremost advocate of good governance in Africa and perhaps the most consistent and passionate today.
Fed up with the “when will he go; will he go?” debates over tenure elongation in African countries, President Kagame aligned with Ibrahim on the need for Africans to enforce term limits for leaders.

Germane to the quality of performance as a leader’s age may be, the Rwandan leader thinks it is not the most crucial factor. The crux, in his view, is service delivery, the “practical side” of all discourse on development.  Illustrating his opinion with the example of his country’s bounce-back after a terrible internecine conflict of 1994, Kagame wants Africans to stop talking and start doing “what requires to be done”.

In the mean time, Africa’s economy continues to race along at over 5 percent at a time Europe is praying to hit half that rate.  There is no time better than now to review the quality of leadership the continent has had in the past half-century and what Africans we want it to be, going forward 50 years hence.

The jury is out.  Has Africa’s leadership served Africa well?