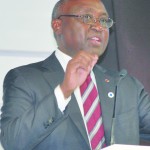 There is no evading the question “what do Africans want?” The poser has been hanging over the African firmament since the 1950s when liberation fighters began the great movements that eventually shove overbearing colonialists off the continent. In those days, the answer was easily summed up as political freedom.

That answer, unfortunately, would not do today.  In the relatively freer but better-connected world of the 21st century, a number of socio-economic issues have taken centre-stage.  The African Development Bank (AfDB), having been in the business of seeking solutions to that same vexed question since 1964, has thrown it up for discussion in its 49th annual meetings in Kigali.

Speaking for the Bank, Dr Donald Kaberuka believes that “Africa is in transition”, enjoying what is probably the most impressive economic buoyancy since the attainment of independence by many countries in the early 1960s.

Bank Chief Economist and Vice President, Prof. Mthuli Ncube couldn’t agree more.  “There is a positive story to Africa,” he says.  For the first time in recorded history, 20 African countries are growing at over 6.5 percent, he notes, intrigued that this is happening “in the middle of the global slowdown”.  More astounding, 20 of the fastest growing economies in the world are in Africa, some racing along in double-digits, while others that boast of no tangible mineral deposits and are handicapped landlocked enclaves, are against these odds, keeping pace.

Unlikely as it may be, analysts everywhere now see Africa as the next engine of growth to pull the global economy out of the woods.  Interestingly, African leaders foretold this turn of events when they declared, 14 years ago, when they the 21st century as the “African Century”.  African Union Commissioner Dr Nkosana Dlamini Zuma sees the continent as “the next pole of growth and prosperity which has come to be accepted by all”.  She, like other experts, acknowledges the potential of a market of over one billion underserved people waiting to transform into great consumers of goods and services, to say nothing of a youthful population yet to unleash their pen-up productive energies as soon as the opportunity pops up.

The upbeat view of Africa’s potential has caught on in the private sector as well.  Chairman, Shell South Africa, Bonang Mohale likens Africa’s rise to China’s.  He recalls that investors who were not in China 10 years ago missed out in the unprecedented boom in that Asian country.  Similarly, he says, those who underplay Africa today would miss out in the coming years.

A word of caution
A word of caution;  exciting as Africa’s economic performance in the past decade may be, Ncube says average growth has moved from the current 5 to 7 percent to reach the “tipping point”.  At this point, many African economies, he explains, would stand the chance of making the middle-income grade they long for.

Polling the thoughts and sentiments of Africans big and small, represented at the Kigali meetings by delegates and observers, it is easy to distill the people’s main wishes.  By far the most important is leadership. Delegates say most Africans pine for leadership that can deliver good governance, accountability and the rule of law.  Small wonder then, that the Bank lists the promotion of good governance and accountability as an operational priority. Leadership, incidentally, has been one of President Paul Kagame’s favourite topics at numerous forums where he has been a key speaker across the world. Regrettably, Africa has so many examples of the failure of leadership and its inevitable consequences and must keep working at bringing about a change.

Next, and rightly so, is peace.  About 15 percent of Africans are said to live in conflict-ravaged countries or areas.  Needless to say, not much development can go on in an unstable environment.  Somalia, the Sudan, South Sudan and Congo DRC cannot exploit their potential until the conflicts eating away at the souls of their states are quelled.

Not a few delegates would want to see an industrialized Africa, where manufacturing contributes a lot more to GDP than the paltry two percent it currently does.  Industrialization, they say, enables economic diversification, which creates jobs and stops dependence on a few primary products.  For this to happen, delegates insist that African leaders must invest in infrastructure development, notably energy. The Bank, itself, ploughs over 50 percent of its resources into infrastructure and hopes to continue whittling down the estimated $93 billion a year needed to bridge the gap.

A good number of delegates can’t speak enough about trade, which is seen as the replacement for aid.  Africa’s share of global trade, put at two percent is downright scandalous; and intra-Africa trade’s share of total African trade, currently estimated at 12 percent is simply unacceptable. These numbers must improve if the continent must reap the benefit of the high growth rates African countries are posting.  Analysts, particularly African economists, have shouted themselves hoarse, canvassing trade as the solution to Africa’s lingering romance with poverty.

Agriculture employs at least 70 percent of Africa’s population and will continue to play a major role in the continent’s economic life.  Melinda Gates, Co-chair of the Bill Melinda Gates Foundation wonders why more emphasis is not placed on agriculture, especially the role of women in agriculture, when drivers of growth in Africa are discussed.

“Research”, she says, “shows that increasing agricultural productivity is the most effective way to reduce poverty in sub-Saharan Africa”.  Few people would disagree.  Across Africa, governments are stepping up investment in agriculture, pulling up small-holder farmers and promoting mechanization and modernization.  Delegates want African policy makers to devote more resources to the needs of the African farmer to solve the problem of food security.  It is doubly revealing that the gender battle will be better waged with more attention paid to agriculture since women in Africa constitute the bulk of subsistent farmers.

The whole idea of an African century is exhilarating.  Agenda 2063, which optimistically peers into the next 50 years, requires much more than the jaw-jawing going on in Kigali and which will be repeated in the coming years in other locations and conferences.

As delegates at the “African Transformation Report” Summit heard, the current optimism about Africa’s place in the global order is not the first.  Similar trends had been observed in the 1970s before the oil shocks brought everyone from the highs of great expectations to the reality of Africa’s weak economic fundamentals.  There’s still too little done about integration, diversification from primary produce and the extractive industry,  and not enough investment in technology and skills acquisition.  All these may once again halt the continent’s march to 2063.

Bank President Dr Kaberuka is a veteran cheer leader for Africa’s development but his parting shot in the preface to the meetings programme brochure is curiously ominous.  This is “a time of cautious optimism”.