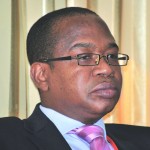 Vice President and Chief Economist Prof. Mthuli Ncube, a distinguished specialist in Mathematical Finance, watches over AfDB’s Knowledge and Research substructure, the think tank that undergirds operations and planning.  The former don at the University of Witwarterand and London School of Economics speaks on Africa’s economy and ways of achieving  its potential using available resources  and institutions.

How would you assess Africa’s economic and social potential in relation to its performance particularly over the past one year and how can the potential be better harnessed towards the development of the continent?

Africa’s immense economic potential was once again demonstrated by the resilience the continent exhibited during the global financial crisis and the subsequent robust recovery. Africa has changed – from slow growing to one of the fastest growing regions in the world. During the past decade, six out of 10 fastest-growing countries were in Africa. The continent’s future prospects are strong.

Still, to ensure high and sustained growth, a key challenge ahead of the continent is further progress with structural transformation – the topic of this year’s annual meetings. To reach its full potential, Africa also needs to tap effectively into longer term trends, such as China’s graduation to higher value-added activities, structural changes in energy prices, climate change and demographic trends. The last point provides a good example of the trend that could be either blessing or curse – blessing if Africa can reap its demographic dividend and major challenge if the energy of youth is not harnessed into productive jobs and entrepreneurship.

Analysts have highlighted the attractiveness of African Sovereign bonds.  What is your take on this?

Closing the gap between Africa’s existing savings rates and high investment needs is key for the continent’s strong and sustained growth. Until recently, however, access to global financial markets was very limited for most African countries. Except for South Africa, the continent has been neglected by global financial markets, largely due to perceived risk and weak economic performance. However, these perceptions have changed with Africa’s growth take-off during 2000s. Africa’s favourable economic conditions and improving political environment offer opportunities for foreign investors seeking better returns on their investment placements. Investors’ appetite for emerging market assets has increased amidst low return in mature markets. Since mid-2000s, there has been a growing impetus for a number of African ‘frontier markets’ to raise funds for development in international capital markets.

Ghana and Gabon, for example, issued successfully a sovereign bond at international markets in 2007. Afterwards, the access of other frontier markets was interrupted by the global financial crisis, with the exception of Senegal’s issuance in 2009. From 2011, there have been at least four issuances with the Zambian bond placement in September 2012 the latest. Zambia, which has a credit rating of B+, raised US$750 million from a 10-year Eurobond, with coupon rate of 5.375 percent. This has happened only five years after the country received debt relief amounting to US$2.7 billion through the Multilateral Debt Relief Initiative (MDRI). The country initially planned to issue bond of US$500 million, but raised the volume in response to demand amounting to US$11.9 billion. The Zambian bond issue is considered cheaper relative to issuances by highly rated advanced economies such as Spain, rated BBB- (US$4.9 billion at an average 5.3 percent). It also follows other debutant issuers – Namibia, Nigeria and Senegal. In October 2011, Namibia raised US$500 million on a 10-year bond with yield of 5.5 percent. Earlier, Nigeria (January) and Senegal (May) raised US$500 million each from international capital markets. Like the Zambian case, each of these issuances was oversubscribed, attesting to the growing attractiveness of the African debt market.

Zambia’s hugely successful debut bond issuance has been touted by analysts as opening up opportunities in Africa’s bond debt market, particularly for the below investment grade fast-growing economies. Funds raised from the issuance of sovereign bonds would provide countries with much-needed resources for critical infrastructure development projects. Africa’s investment needs for infrastructure development in various sectors amount to about US$90 billion a year. However, only US$50-US$60 billion can be met from the countries’ own resources and multilateral development banks. To close this gap, African countries could tap into innovative financing sources, including the issuance of debt instruments in international capital markets.

Over the medium and long term, additional inaugural Eurobonds from Africa are expected. Kenya’s planned issue of a 10-year US$1 billion Eurobond could come as early as 2013. Nigeria has also announced intentions to issue a Eurobond for US$1 billion to finance its energy sector. Angola, Rwanda, Tanzania, Uganda and Mozambique also plan to enter international capital markets.

For the past decade, Africa has had a strong economic growth, but as you admitted some time ago, “headline economic growth” is not enough.  What should African leaders do in this regard?

Africa’s leaders are well aware that reaching high growth is not enough for improving living standards of their people. What is needed is also high quality growth — inclusive and increasingly also green growth. The Bank has recognized the importance of these two objectives and made them pillars of its long-term strategy (2013 – 2022). In turn, structural transformation is a means to achieve both inclusive and also gradual transformation to green growth.

A number of factors needs to be in place for advancing structural transformation agenda, key among is strong, visionary and determined political leadership.   On the economic side, African countries have improved macroeconomic management and business environment, but more needs to be done about improving governance of natural resources and harnessing them for development. The infrastructure gap, which remains high, also needs to be closed to increase continent’s connectivity and inclusion. The Bank continues to make great contributions to Africa’s development in this area as well as in other areas of operational priority.

The AfDB has harped on the need for inclusive growth on the continent. How should African countries themselves go about it and to what extent would you say the political situation in North Africa and the situation in Mali for example, have impacted on Africa’s overall economic outlook?

The concept of inclusive growth is not new; it is about a sustained and long-term growth that is shared by all societal strata, particularly those at the bottom of the income distribution. These people are often deprived of both physical and human assets and unable to reap growth benefits.

Now that Africa staged robust recovery, promoting inclusive growth is now a matter of urgency. The ingredients are well known: boosting agricultural production, helping small businesses, better quality and relevant education, encouraging the private sector, improving the investment climate and addressing gender, connectivity, and evening out regional disparities. Promoting inclusive growth will also help to ensure political stability and social cohesion as well as equal distribution of wealth, increased social and productive sectors’ spending leading to the creation of decent work. Conflict can wipe out years of development achievements. For example, political instability in Mali and the recent rebellion in the Central African Republic, pose substantial risks to the continent’s growth. For countries in fragile conditions and those where civil wars are raging, growth prospects will be limited. The risk of regional contagion, through neighbourhood effects, cannot be discounted.

Africa’s share of the Sovereign Wealth Fund (SWF) is set to increase with the recent establishment of SWF by Angola, Ghana and Nigeria. What role do you see SWF playing towards eradicating poverty and enhancing competitiveness in Africa?

While it is true that Africa’s share of Sovereign Wealth Fund (SWF) is set to increase, this should be put within the context of a global perspective. Currently Africa accounts for 14 SWFs with a total amount of US$114 billion in 2009, representing two percent of global SWFs. The largest sovereign funds in Africa are the Libyan Investment Authority and Algeria’s Revenue Regulation Fund with respectively US$65 billion and US$56.7 billion of total assets. This is disproportionately lower than the Norwegian Government Pension Fund of US$656 billion and the US$627 billion managed by the Abu Dhabi Investment Authority, the world’s two largest sovereign funds.

Africa’s contribution could increase in future with the establishment of new SWFs. In 2012, three SWFs have been launched in Angola, Ghana and Nigeria while the Tanzanian government has announced plans to create its sovereign fund to manage the country’s revenues from new gas and oil discoveries. In addition recent major oil and gas discoveries in East and West Africa are likely to give new opportunities for more African SWFs in the mid-term to foster management of revenues from these new resource discoveries.

Apart from using SWF to ensure that resources of a country are preserved for future generations, African SWFs can enhance productivity and spur inter-African investment through allocating part of their assets to growing sectors in Africa. African countries can also use their own SWF assets to invest in domestic companies to boost growth and to create jobs through spurring private sector’s role.