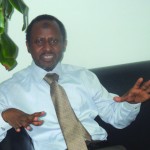 Dr  Shehu Yahaya is Executive Director for Nigeria and Sao Tome and Principe at the African Development Bank (AfDB).  In the discussion with AnnualMeetings Daily excerpted below, he speaks on the mandate of the Executive Director and the particular challenges of representing the interests of the countries in his portfolio.  He also touches on the Bank’s aid to his country, Nigeria and how the people can benefit much more from such assistance.

What are the challenges of your job especially in the light of recent developments in Africa?

The responsibility of the Executive Director is to provide oversight over the activities of the AfDB in general; that is, strategic guidance to ensure the institution is working to achieve its mandate of promoting development on the continent.  This is my primary responsibility.

One of the biggest challenges is that the Bank has members from non-regional countries especially from the industrialised world.  There has been substantial slowdown in the economies of our non-African member countries.  Thus, they are responding to the need for them to look more inward than outward for the good of their economies. It is increasingly difficult for them to maintain support for African countries when they themselves are facing economic challenges in their own countries.

Our role is to convince these countries to continue to support Africa in spite of their own problems.  We tell them that it is in their interest to continue to support Africa because if Africa develops, it will help to speed up their own recovery since Africa is increasingly important as a source of trade, consumption, export, and resources.  We let them know that their recovery is tied to Africa’s development.

Africa’s growth rate over the last decade has been respectable.  However, despite the positive growth rate in Africa, there is income inequality internally and regionally.  There is a wider gap between the rich and the poor as well as discrepancies between regions in same countries.

The conflicts that have occurred in Africa are because some parts have been marginalised: be it in Sudan, Cote d’Ivoire, Mali etc.  When you have social conflicts as in Africa, they undermine long periods of growth and significantly reverse progress made in terms of investment over a long period of time.

These are challenges the Bank must note and address to promote shared prosperity, inclusiveness as well as other new challenges such as climate change.

Why is Nigeria not stepping up to a higher borrowing grade and still being categorised as a very poor country?

The answer lies in the country’s recent past.  Nigeria had a high level of debt before 2005; until we paid a substantial part and got some forgiveness.  Since then, Nigeria’s government decided to continue borrowing only at concessional rates to prevent another debt build-up.

Part of the problem with the previous debt was that it was not used judiciously to increase production and capacity.  Debt is not inherently bad, as long as it is used to improve social and economic infrastructure that spur growth and development.

Incidentally, Nigeria is now at the cusp where it needs to borrow more to fund many of the projects and programmes needed to move the economy to where it wants it to be.  At the AfDB countries are categorised. Some can borrow only at the soft window—at concessionary rates, while others can borrow at the hard window—at market rates.  Nigeria is a blend and can borrow at both.

Nigeria is currently reviewing the policy of sticking only to the soft window and may avail itself the opportunity at the hard window if it can use it for productive purposes.

Even so, Nigeria is getting to a level where it may no longer qualify for the concessionary window on account of its income per capita and GDP.  This may be good as it means the country can access more funds for important development programmes and projects.

Nigeria has significant resources to enable it to cope.  The private sector is already booming at the hard window.  Most of the assistance to Nigeria in the future will probably go to the private sector.

Assess AfDB projects in Nigeria.  Are they beneficial?  Do we need them for now?

Generally, AfDB projects are important in some areas.  The portfolio has been in roads, irrigation and water supply, fadama, power, communication; lines of credit for MSEs.

Not all have done well but the biggest problem has come from the lengthy approval period in Nigeria’s parliament that causes delay before disbursement is made.  In some cases it has taken more than two years for loans to be approved by the National Assembly.

Occasionally, implementation has been poor such as the Ibadan water supply project.  But some are successful like the fadama projects in the North.  In the private sector, the Main One cable project has been good and timely, and a second phase is in the pipeline.  The AfDB was instrumental to its success and contributed the lion’s share of resources.  The popular Lekki Road was partly funded by the AfDB; and the Bank has also approved US$300 million for the East-West road.  Upcoming projects include a metro line in Abuja, the nation’s capital city.