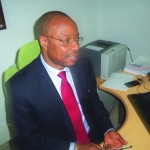 A veteran of many conventions on the the environment and climate change, Dr Anthony Nyong, Division Manager,  Compliance and Safeguards Division, has a well-informed opinion of how governments should deal with the issues of climate change. Since the effects of climate change cut across several sectors of the economy, impinging on energy, agriculture, health and even finance, no single national Ministry or Agency is best equipped to address the cross-cutting issues of Climate change. A proper institutional structure would likely be an inter-ministerial entity that would allow for proper coordination. Dr Nyong concedes that, contrary to widely-held opinions, African leaders are aware of the enormity of the problem of climate change. However, more resources still need to be channelled to supporting climate-resilient development on the continent.

Rio+20 marked the 20th anniversary of the UN Conference on Environment and Development that took place in Rio de Janeiro in 1992. Rio+20 set out to secure renewed political commitment for sustainable development, assess progress and implementation gaps in meeting previously agreed commitments, and address new and emerging challenges. The conference was held from 13-22 June 2012.

The main issues that were addressed at the Summit include how to transit to a green economy in the face of climate change, build institutional mechanisms for sustainable development, mobilize the necessary means to implement sustainable development, including raising the required finances at scale.  In Africa, these challenges are amplified by the fact that the continent has the least capacity to adapt to climate change while at the same time, grappling with the consequences of unrestrained and unsustainable exploitation of natural resources.

The African Development Bank, in partnership with WWF published the 2012 Africa Ecology Footprint Report, which was launched at the Summit. The report shows that Africa is fast exceeding its bio-capacity. The continent cannot afford to continue in its old ways of development, ignoring the role of natural capital in its development strategies and plans.

How can Africa get the future it wants?

The outcome document outlines a vision for sustainable development and the resources that would be required to attain this vision. However, it does not address how these resources will be realised. The resources go beyond money to include human and institutional capacities, technology, etc.  Many developed country partners and donors were called upon to honour past commitments. However, the traditional aid system has failed us and will not be the model that will drive post-2015 sustainable development. Many traditional donors are in difficulty and are battling economic problems of their own. We need to collectively seek out new and innovative mechanisms to generate the resources that we need to implement sustainable development. This might including appropriately valuing and taxing Africa’s natural resources contribute to development elsewhere except in Africa.

The outcome document, inter alia, reiterates the importance of remaining firmly committed to the full and timely achievement of the MDGs and of respecting all Rio Principles, taking into account different national circumstances, capacities and priorities. The outcome document calls for new Sustainable Development Goals (SDGs), including the eradication of poverty and hunger. The purpose of the SDGs is to help translate global aspirations into practical actions.

In this regard, the UN Secretary General has established several initiatives to deliver on the outcomes of Rio+2o as well as for the development of the SDGs. These include the establishment of the High Level Political Forum on Sustainable Development to replace the Council on Sustainable Development; and the establishment of the Open Working Group to lead an intergovernmental process to establish the SDGs. This Group, co-chaired by Mr. Macharia Kamau, Permanent Representative of Kenya and Mr. Csaba Kõrösi, Permanent Representative of Hungary to the UN, The Group has met three times and the African continent is strongly engaged in the development of these SDGs.

What efforts are African countries making? How is the Bank responding?

The African Development Bank is working in partnership with UNECA and the African Union to coordinate Africa’s inputs into the SDGs through sub-regional consultations.

In addition, the African Ministerial Conference on the environment has identified flagship programmes to implement the outcomes of Rio+20. These flagship programs are the African Green Economy Partnership, Sustainable Land Management, Desertification, Biodiversity and Ecosystems-based Adaptation to Climate Change; Partnership for Sustainable Consumption and Production; African Programme on Sustainable Energy Development and the Africa Integrated Environmental Assessment for Sustainable Development. The overall objective of the Regional Flagship Programme Framework is to facilitate the effective implementation of Rio+20 outcome by providing a coherent regional programme framework that respond to the need and priorities of African countries and provide a platform for a more coordinated engagement and support of development partners to the region.

The Bank is implementing a 5-year climate change action plan where it is poised to invest about $6.4 billion dollars to support climate-resilient and low-carbon development in Africa. In 2012, the Bank had invested about $2.2 billion in climate-change related projects. The Bank is also assisting African countries to tap into global climate change finances such as the Global Environment Facility and the Climate Investment Funds.

In addition to physical investments, the Bank is building capacities of RMCs to address the threat of climate change. Last year, the Bank helped to train hundreds of experts on climate change, drawing on its experience on several climate sensitive projects it is already funding.  For us climate change is a matter of survival, considering the direct link between the exploitation of natural resources and the climate.

Are African leaders aloof to the threat of climate change as critics allege?

Several African countries have embraced the green growth agenda. At their request, the African Development Bank is supporting several RMCs to develop their national green growth strategies, and several others to mainstream climate change into their country strategy papers. With fragile states such as Sierra Leone and Rwanda are at the forefront, it is unfair for anyone to still say that African leaders are aloof to the threats of climate change.

However, considering the increased frequency of climate-related disasters and the resulting economic losses that Africa is experiencing, no efforts should be spared in ensuring that climate-resilience is built into Africa’s development. We are seeing climate change reverse the developmental gains that we have made on the continent. Africa’s vulnerability and low-adaptive capacity should make building climate resilience a top priority if we want to achieve sustainable development.