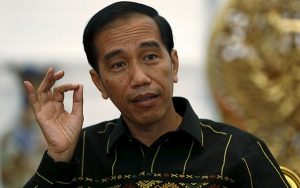 Indonesia’s President and host of the Plenary Session of the IMF/World Bank, Joko Widodo, yesterday drew a burst of guffaws from a packed audience of delegates including visiting leaders of the Association of South-East Asian Nations (ASEAN) a few minutes into his short but moving welcome address to declare the talkfest officially open.

The Indonesian leader expressed dismay at the unfortunate sabre-rattling, especially between the world’s two biggest economies — USA and China — and likened the global tussle for power and influence to the epic battles for the Iron Throne in the award-winning movie serial, Game of Thrones.
President Jokowi lamented that the trade war ignited by President Donald Trump is causing havoc in global markets as stocks the world over are taking hits, in the face of escalating tit-for-tat tariff increases and dissolution of trade agreements on grounds of nationalism. In the Indonesian leader’s opinion, globalisation has been beneficial to both advanced and developing economies and protectionism will only inflict pain on winners and losers alike.

Already, fallouts from the tension in trade relations as well as other global challenges such as climate change, migrant crisis and oil price hike are proving the “moral lessons” President Jokowi projects, right. Even the US, the world’s most developed economy, is taking a pummelling from the effects of the “Game of Thrones” it sparked off. The country’s stock market is cooling, just as deadly storms, associated with global warming (which President Trump denies) are ravaging the Florida panhandle.

If the US “wins” the “Game”, it will amount to a Pyrrhic victory, in President Jokowi’s informed opinion. “It is pointless to celebrate victory in the midst of so much destruction. It is pointless to be the leading economy in a sinking world,” he reasoned; as he passionately enjoined world leaders to cooperate in fashioning monetary and fiscal policies to mitigate the effects of trade protectionism, unilateralism and other uncertainties.

Chairman of the plenary session, Finland’s Finance Minister Petteri Orpo, may well have developed his address in the same philosophical environment as the Indonesian leader. “Trust,” he said, is all that is required to keep the world from self-destruction. Borrowing from the phenomenal success of his native country in overcoming poverty, Orpo regaled the audience with quaint tales of how Finland moved the country from one of the poorest agrarian economies in Europe to one of the wealthiest in the world.