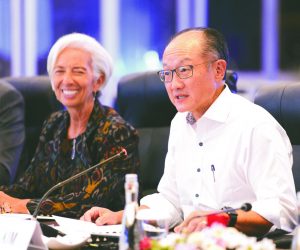 The global economy, like Indonesia, the host of this year’s largest financial-cum-economic talkfest, is “resilient and determined” to move forward. The world’s 4th most populous country (population: 262million) after China, India and USA, is dealing with the challenge of an unfortunate, devastating earthquake, while simultaneously hosting the Asian Games in its capital, Jakarta.

That was how World Bank President Dr Jim Yong Kim kicked off his address to the world at large through the global media represented at the Annual Meetings of the Bretton Woods twins in Bali, Indonesia’s popular tourist city.

Fund Managing Director said much the same thing, likening the inner strength of the hospitable Indonesians to the world’s troubled, but resilient economy, which in spite of numerous headwinds, is expected to post a decent 3.7 percent growth for this year, according to IMF projections.

Of the myriad challenges facing humanity today, the World Bank, at the meetings, is focusing on two long-term issues that are critical to every country — developed or developing rich or poor. Dr Kim identifies these as climate change and Human capital development.

The first — climate change —is an existential threat to global development and efforts to end poverty, and in the opinion of most experts today, the warming planet is already having an impact on the poorest and most vulnerable. The effects are already causing unprecedented havoc all over the globe in extreme weather conditions with attendant consequences. Even the US, whose leadership is known for its denial of global warming, is currently contending with the destructive force of Hurricane Michael around Florida.

That’s why the Bank launched a new tool to help countries make those investments in their people: the first Human Capital Index. According to the Bank boss, “policies to build human capital are some of the smartest investments that countries can make to boost long-term, inclusive economic growth”.

The argument for the Bank’s stance is compelling: “If a country’s children grow up, unable to meet the needs of the future workplace, that country will find itself incapable of employing its people, unable to increase its output, and utterly unprepared to compete economically”.

The Human Capital Index will give policymakers compelling evidence that delivering better outcomes in children’s health and learning can significantly boost the incomes of their people —and shape the direction for their countries — far into the future, the Bank boss concluded.