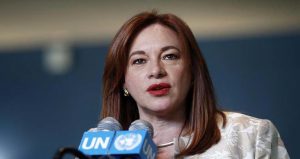 THE United Nations General Assembly honoured Nelson Mandela, the former South African President and anti-apartheid campaigner with a pledge to build a just, peaceful and prosperous world and to revive the values for which he stood.

At the Nelson Mandela Peace Summit, held as one of the high-level events at the ongoing 73rd UN General Assembly, the world body declared 2019-2028 as the “Nelson Mandela Decade of Peace.” Member states of the UN also adopted a political declaration resolving “to move beyond words” to promote peace and end conflicts.

The peace summit, which coincided with the centenary year of Mandela’s birth, identifies the personal qualities that made Mandela a transcendent humanitarian noted for his “humility, forgiveness and compassion” – and connects them with UN goals, including disarmament, human rights, and poverty alleviation.

Addressing the Summit, the President of the UN General Assembly Maria Fernanda Espinosa Garces said Mandela “represents a light of hope for a world still torn apart by conflicts and suffering.”

The UN Secretary-General Antonio Guterres spoke of the growing pressure against human rights around the world, and urged everyone to draw inspiration from Mandela’s wisdom, courage and fortitude, to face the challenges. “Madiba was a profound influence for peace and democracy… Let us commit to build on Nelson Mandela’s legacy so that all people everywhere can enjoy peace, prosperity and inclusive and sustainable development,” Guterres said.

Graca Machel, Mandela’s widow also challenged world leaders celebrating his life to put their egos and partisan politics aside and honour his legacy by ending the “senseless violence” plaguing too much of the world.

Before the commencement of the summit, a statue of Nelson Mandela was unveiled at UN Headquarters by Guterres alongside Espinosa Garces