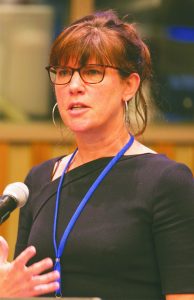 As part of efforts to boost agricultural productivity and tackle the rise in global hunger, the Global Partnership for Sustainable Data has launched an unprecedented drive to collect data from 500 million smallholder farmers in 50 developing countries.

The programme, unveiled at the Data to End Hunger event at the UN General Assembly, seeks to enhance food security and livelihoods across Africa, Asia and Latin America by 2030 – and provide more accurate data to inform policy-makers.

The initiative comes in the wake of figures which show that global hunger has risen for the third consecutive year, with 821 million people undernourished in 2017.

Claire Melamed, Chief Executive of the Global Partnership for Sustainable Development Data said the initiative was considered imperative because data is foundational to so many of the things the group wants to achieve. “Our aim is to invest in basic data over a long period, which can give governments the information that they need to really make progress on agricultural productivity. This is not a one-off, big bang collection of data, it’s about creating a better system,” she said.

The initiative is expected to utilise two well-established surveys — the World Bank’s Integrated Surveys on Agriculture (ISA), and the AGRISurvey from the UN Food and Agriculture Organisation (FAO) — rolled out on a wider scale to fill knowledge gaps.

Laura Tuck, Vice President for Sustainable Development at the World Bank is optimistic that the initiative will boost production. “By making agricultural data more readily available in 50 low-income countries, we can help accelerate this transformation, to boost sustainable food production and allow farmers to thrive,” Tuck said.

While donors, including the United States Agency for International Development and the Bill and Melinda Gates Foundation will contribute to the initial data collection efforts, the 50 participating countries will co-finance the programme in the long term.