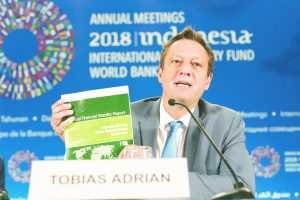 It’s not all gloom and doom in the world’s financial system, in spite of worries over growth prospects.

The foundation of the global financial system is stronger than it was a decade ago when the collapse of the investment bank Lehman Brothers, caused a spectacular crash that reverberated all over the globe. Thus spake IMF Financial Counsellor Dr Adrian Tobias, at the launch of the Global Financial Stability Report (GFSR).

The financial crisis, Dr Adrian said, led to the development and deployment of new monitoring, supervisory and regulatory tools which have help to safeguard the financial system. New minimum capital requirements, regular conduct of stress-tests, the adoption of macro-prudential frameworks and curbing the excesses of shadow banking activities have helped safeguarded the financial system from crisis.

The revelation was a soothing balm on the nerves of delegates who have in recent months being bombarded with a surfeit of bleak news of human suffering as headlines reel out disasters after calamities ranging the ill effects of extreme weather conditions, migrant crises and repudiation of multilateralism in global affairs.

“Looking back, a new financial architecture has been put in place which is a testament to the resolve of policy makers to collaborate internationally and to avoid a repeat of the Great Depression,” the Dr Adrian announced. He, however, cautioned against complacency as “new risks” have emerged in the horizon and the resilience of the global financial system is yet to be tested.

The GFSR captures them: Rising inequality has fuelled populism which has led to rising protectionism, thus contributing to policy uncertainty. The escalating trade war is impacting negatively on financial markets, some of which have seen sell-offs in their markets. Also, as support for multilateralism wanes, its impact would constrain policy makers’ ability to respond to future crisis.

The report also identifies rising US interest rates, an appreciating dollar and intensification of trade tensions have led to market pressures in Emerging markets. Several countries have experienced large currency depreciation, difficulty in rolling over debt and sharp reversal of portfolio flows. Turkey and Argentina have been worst hit as their currencies have depreciated by about 60 percent since the beginning of the year.

On countering the rising vulnerabilities, the Financial Counsellor called for the deployment of macro and micro prudential policies such as the active use of counter-cyclical capital buffers, increased supervision and regulation, and policy makers should pay attention to emerging risks such as threat of cyber-attacks, and risky activities that take place outsider the regulatory perimeter.

IMF’s prescription is as simple as it is elegant: Increased international collaboration.