Rapid population growth in developing countries, especially Africa, could reverse the hard-won gains of extreme poverty reduction, according to the latest edition of the GoalKeepers Data Report issued by the Bill and Melinda Gates Foundation. 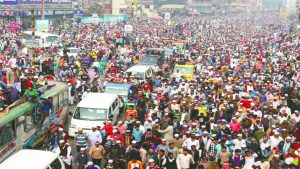 Though, the report, GoalKeepers: The Stories Behind the Data 2018, highlighted gains made in lifting 1billion people out of poverty over the past 20 years, it calls attention to changing demographic trends that put future progress of reducing poverty at risk.

Using new data projections, the report reveals that poverty within Africa is concentrating in just a handful of countries, which are among the fastest-growing in the world. By 2050, over 40 percent of the extremely poor people in the world will live in these countries.

Despite the sobering projections, Bill and Melinda Gates is optimistic of the growing youth populations helping to drive progress.

And the way to go? Investing in the health and education of young people in Africa could unlock productivity and innovation, leading to a “third wave” of poverty reduction, which follows the first wave in China and the second in India. Africa is thus the next frontier in reducing poverty.
The report makes the case for leaders to invest in the power and potential of youth to continue progress.