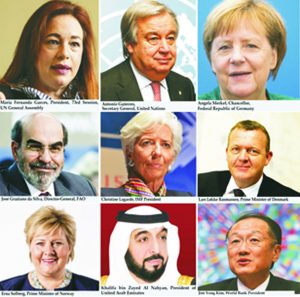 The 73rd Session of the United Nations General Assembly is starting out in style. It is kicking off with H.E. Ms Maria Fernanda Espinosa Garcés in the driving seat as President. For gender activists, it is a triumph worth celebrating. Ms Espinosa Garcés, former Foreign Minister of Ecuador, is the fourth woman in history and first woman to represent Latin America and the Caribbean at the world body, indicating the UN is already taking seriously its own 17 Sustainable Development Goals (see illustration), the ambitious agenda which prioritizes gender equality among others and hopes to, in the words of Secretary-General Antonio Guterres, “transform the world” by the year 2030.

Interestingly, the new President is equal to the task, boldly pledging to “promote the interests and the commitments of the 193 member-states as the UN searches for solutions to the most difficult problems facing humanity. She is concerned that the organisation is yet to get the vote of confidence it needs from the broadest section of the public and looks forward to the UN family on the full and speedy implementation of instruments and agreements. Over the next 12 months, member-states’ delegates will be addressing 330 resolutions that reflect global concerns over 100 sessions in pursuit of global consensus.

There is hope that the world would be able and willing to make the 2030 dream a reality. A couple of weeks ago, at the Global Climate Action Summit, experts reckoned that UN-backed commitments to take action against the effects of climate change could bring about as much as $26 trillion in economic gains globally and help to create as many as 65 million new low carbon jobs by the 2030 deadline. Government and corporate organisations alike have been showing willingness to help the world achieve the goals. Investors’ Agenda, one of the focus areas of the Global Climate Action Summit, brought together nearly 400 investors, managing $32 trillion of assets, who pledged to scale up the flow of capital into climate action, and a more sustainable, low-carbon economy. However, some commentators complain that funding for the SDGs may present more problems than the world is currently envisaging just as others point to the buy-in of the International Monetary Fund’s (IMF) Managing Director Christine Lagarde as a good omen for the eventual involvement and participation of sundry investors from government agencies, multilateral institutions as well as the powerful global private sector.

To get the Assembly laser focused on transforming the world, Ms Espinosa Garcés says she’ll get everyone to adopt her D.A.R.E. strategy for Delivery, Accountability, Relevance and Efficiency. This, she says, would enable members to dare to “deliver better, dare to improve the way we work together within the system”, revitalize and boost multilateralism, revitalize the General Assembly, and revitalize the UN system into a strong rules-based international system.

After talking with member-states and looking at the 40 mandates and over 15 high-level events and conferences over the course of the session, the Assembly’s support staff under Mrs Garcés have come up with seven priorities.

Why seven? Ms Garcés explains: “Because we need to deliver seven days a week; we need to work for the disenfranchised, for the poor, for the refugees, seven days a week. Climate change doesn’t stop on Fridays. We will work as needed to deliver on the seven priorities.”
The list is instructive, starting with gender equality. As the fourth woman and the first Latin American woman to preside over the General Assembly, there is no prize for guessing why this one makes the list.

The third priority is going to be on environment, with two areas of work basically: the assessment of the three years after the Paris Agreement (on climate change), especially looking at the means of implementation, meaning climate finance, low-carbon technologies and capacity building. A ban on plastics is something that the General Assembly will consider to play an important role on environmental action.
The rights of persons with disabilities is another. Member-States will be encouraged to sign the Convention and to commit to the rights of persons with disabilities, especially on issues concerning access to decent work.

Peace and security remain very important, but with a focus on the preventive and the “sustaining peace” approaches, focusing on the role of youth. This is also going to be connected to one of the main deterrent strategies, which is to provide the youth with alternatives, to provide them with job opportunities, which ultimately prevents them from engaging in violent activities.

Most important is the priority on revitalization of the UN. It is a mandate on Security Council reform, its implementation which has been negotiated for a full year by Member-States. The third pillar of the reform is, the management reform.