Question: What should be tops on the priority list of developing countries?
Investment in: (A) infrastructure. (B) human capital development.
Chances are that policymakers would plump for option A.
Buzzzzz!
Ooops! Not so fast, says World Bank President Dr Jim Yong Kim. B is the correct answer; with solid support of empirical data. 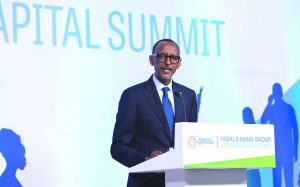 For the first time, the World Bank has succeeded in putting a lot of resources into and getting right the metrics for assessing human capital development. The Bank Chief says the institution’s researchers now have convincing data that shows a positive correlation between investments in human capital and economic growth. For the Bank, this is a major development that will influence its operations and policy advice delivery activities going forward.

Bank researchers have found that had countries been adequately investing in people over the years, global per capita GDP would be 7 percent higher than it is today!

And that’s not all. They also discovered that the top 25 percent of countries that spent most on human capital development achieved 1.25percent GDP growth rate than the 25 percent at the bottom. A quick calculation of what difference that would make after, say, 25 years would shock any analyst.

The Bank wants an end to policymakers’ reflexive concentration of investment on infrastructure in the hope that all other benefits would follow. The new order could be summed up in the Biblical analogy “seek ye first the development of the people and other economic goodies would follow.”

There are ardent supporters of the new economic gospel. Rwanda’s President Paul Kagame, renowned for bringing his country back from the brink of politico-economic ruin into global reckoning on account of its near miraculous recovery over in the short term is one. President Kagame could not agree more with Dr Kim. “Human capital is the true driver of growth,” he told a packed hall at the ongoing IMF/World Bank Annual Meetings seminar themed Human Capital Summit: Committing to Action to Drive Economic Growth.

Speaking from experience, the Rwandan leader said the trajectory of progress depended on how well people’s capabilities are built and used in the early stages of their lives. “By investing in education and healthcare delivery, we turn people’s ability to think into the ability to help themselves and the society,” he asserted.

By doing exactly what he advocated, Rwanda, President Kagame revealed, has achieved 80 percent reduction in maternal and child mortality, 100percent broadband penetration, improved technical education and a massive drop in stunting of its citizens, not to mention impressive growth rate that endured in the past 23 years. A well educated people not only build better infrastructure, they also appreciate and harness them more profitably, he concluded.

Cote’ d’ Ivoire’s Prime Minister Amadou Coulibaly said his country is so engrossed in human capital development that it has built 10,000 schools and five universities since 2012. The country is working hard to recover from a decade of political turmoil that caused the neglect of its young people. Today, policymakers in the country place education as number one priority.

Argentina’s Finance Minister Luis Caputo, another distinguished guest panellist swung in the general direction of other speakers. In addition to heavy investment in nutrition and healthcare, the fiscal authorities are intent on growing citizens’ capabilities through support for SMEs. Policymakers there have come to the conclusion that only an empowered people can deliver the country from the boom-bust cycle it has been mired in over the past two decades.

For the World Bank, the business of development banking has just got a new meaning and purpose: People first.