IF there has to be any meaningful headway in attaining the Sustainable Development Goals (SDGs) as well as global economic growth, empowering women with the requisite finance to own their own businesses is critical, says Ivanka Trump, an entrepreneur and advisor to the President of the United States. 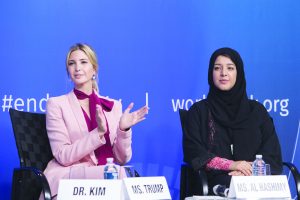 In her presentation at a seminar tagged: Taking Women-Owned Business to the Next Level at the ongoing IMF/World Bank meetings, she said women entrepreneurs should scale up to the next level by moving upward from micro enterprises to managing bigger businesses.

She explained that helping more women to become successful entrepreneurs and leaders has become imperative because it will simply unleash the power of women and bring much-needed peace and stability to so many regions of the world that are plagued with conflicts.

Ivanka noted that over the years, women’s participation in business has been largely retarded by closed access to finances, traditions, cultures and religion. She described the launching of the Women Entrepreneurs Finance Initiative (WeFi) by the World Bank Group and partners as a step in the right direction. The initiative is geared towards mobilising $300 million within five months for on lending to women enterprises.

“The progress that the WeFi has made over the past few months is encouraging and exciting. WeFi is officially operational, and I look forward to continuing my work with the World Bank Group via this facility to support women entrepreneurs around the globe and remove existing barriers to their growth and success,” Ivanka said.