Europe is having one of its best economic moments in recent years. Paul Thomsen, director, European Department of the IMF, says the growth in many European countries has been evenly distributed since the Euro was introduced in 1999. “Europe is doing well. The economic news is good. The recovery remains robust. We have revised upwards of projections of GDP growth to 2.1 percent for 2017 and to 1.9 percent for next year. Importantly, the recovery is broad based across categories of demand with investments now playing a stronger role,” Thomsen says. 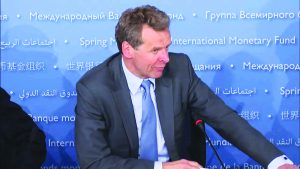 Thomsen notes that the European Department of the IMF is fully in support of the monetary policy stance of the European Central Bank (ECB). On fiscal policy matters, Thomsen argues that there is a strong case for countries with fiscal space to increase spending as would help to boost growth. He, however, admonishes countries with limited fiscal space to continue with fiscal consolidation to bring down debt. He also recommends that the continent’s financial system should be strengthened.