Wolfgang Schäuble’s decision to step down as German finance minister and become president of the national parliament has been described by analysts as a watershed moment in the country’s politics that marks the end of his long and often controversial tenure controlling the purse strings of Europe’s largest economy. 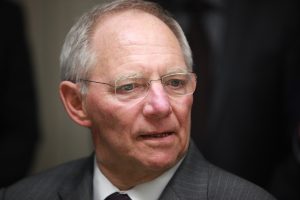 Schäuble, 75, agreed to make the shift on the prompting of Chancellor Angela Merkel and other senior members of their Christian Democratic Union. His departure will reverberate across Europe, where he was often criticized as a financial disciplinarian who blindly insisted on the adherence of fiscal strictures to the detriment of the eurozone’s economy. In his eight years as finance minister, he resisted countless attempts by France and other eurozone countries seeking to loosen fiscal rules to juice the region’s economy.

Germany’s financial muscle made him arguably the central figure in Europe’s response to the euro crisis. In countless marathon negotiating sessions with his eurozone counterparts, Schäuble always kept Germany’s wallet close to his chest, demanding that Greece and other bailout recipients push through deep spending cuts and other reforms in return for rescue money.

Even as that hard line won him accolades at home, establishing him as one of Germany’s most popular politicians, it earned him a reputation in Europe and beyond as an uncompromising ideologue. In Greece, for example, Schäuble’s name became synonymous with the country’s hated austerity programs and he was often caricatured as a fiscal sadomasochist in full Nazi regalia.

A child of World War II, Schäuble belongs to a generation of German conservatives for whom Europe represents Germany’s only salvation. Far from wanting to damage the continent, as his critics allege, Shäuble believed he was helping to save it by shoring up the EU’s monetary union, of which he was an architect.

Even in the face of bitter attacks, he rarely lost his cool or his sense of humour. He tried to explain his belief in fiscal discipline by quoting Goethe: “If everyone sweeps his own doorstep, the neighbourhood will be clean”. Whether that wit will come handy in his new role in the Bundestag is an open question.

Born in September 1942 in Freiburg in Breisgau to a tax finance advisor. After completing his Abitur in 1961, Shäuble studied law and economics at the University of Freiburg and University of Hamburg which he completed in 1966 and 1970. In 1971 Shäuble obtained his doctorate in law

Schäuble has been a member of the Bundestag since 1972. From 1981 to 1984 he was parliamentary whip of the CDU/CSU group and in November 1991 he became its chairman. Schäuble gave up this position in 2000 as another consequence of the financing scandal. Between October 2002 and 2005, Schäuble served as the parliamentary group’s deputy chairman, under the leadership of Angela Merkel.

Ahead of the 2005 elections, Angela Merkel included Schäuble in her shadow cabinet for the Christian Democrats’ campaign to unseat incumbent Gerhard Schröder as chancellor. During the campaign, Schäuble served as Merkel’s expert for security and foreign policy.

Following the 2009 federal election, Schäuble, by then one of Germany’s most seasoned politicians, became Minister of Finance in October 2009. Then aged 67, he was the oldest man in the cabinet and the longest-serving member of the parliament in the history of the Federal Republic. He was also one of seven conservative ministers in Merkel’s outgoing government who remained in power. By 2014, the Wall Street Journal called Schäuble “Germany’s second most powerful person after Chancellor Angela Merkel.”

The job of parliament president involves overseeing debates and ensuring all parties adhere to protocol and respect decorum. As the Bundestag’s longest-serving MP — he joined in 1972 — Schäuble is uniquely qualified to referee what promises to be an unruly parliament in the coming years with the far-right Alternative for Germany as the third-largest group.

“I am the personification of the German republic’s long-term memory,” Schäuble said when he turned 70. “Because I have nothing left to prove, I have more independence.”