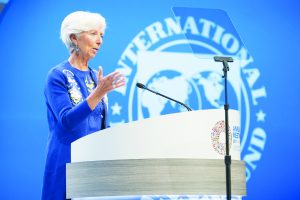 Christine Lagarde, Managing Director of the International Monetary Fund, (IMF) says the world’s finance ministers and central bank governors should utilize the major opportunity offered by widespread economic recovery to expand its benefits to those who are not yet growing and include those who are excluded or are at the risk of being excluded.

This category includes more than 40 emerging and developing countries —representing about 15 percent of the world’s population — who are currently experiencing declining per-capita income. It also includes the many people who are facing stagnant wages, limited job opportunities, and dislocations caused by technological change, trade, and the legacy of the global financial crisis.

Quoting an ancient Greek physician Hippocrates, who once said: “Healing is a matter of time, but it is sometimes also a matter of opportunity,” Lagarde, notes that “our task is heightened by geopolitical tensions, political uncertainty, and also—sadly—recent devastating natural disasters.”

She urges the fiscal and monetary managers to set for themselves three priorities to be able to spread the benefits of the recovery to all. These priorities include getting the economic fundamentals right; tackling more decisively the issue of excessive inequality and addressing the major concerns of young people to help ensure bright prospects for them and for future generations.

“This means using a tailored mix of monetary, fiscal, and structural policies to consolidate the recovery and raise growth prospects. Managing a smooth normalization of monetary policy is critical; so are fiscal strategies that reduce high debt without hurting growth and confidence,” she says.

Lagarde insists that the world’s finance ministers and central bank governors must also guard against the build-up of financial vulnerabilities and initiate reforms that can lift productivity and potential output. “Our analysis of structural reforms over economic cycles shows that labour and product market reforms are more potent during economic upswings. We must not miss this opportunity: it holds the promise of more growth, more jobs, more income,” she says.