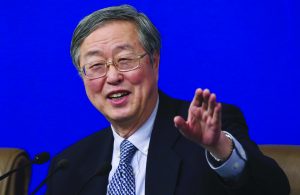 DR Zhou Xiaochuan, Governor People’s Bank of China, the central bank of the world’s second largest economy, is arguably, one of the most influential economic figures in the world. The economist, engineer and public servant has run China’s monetary policy under three presidents and dealt with three US Federal Reserve chairmen in a career that makes him the longest serving central bank chief in the world’s top 20 economies.

Since 2002 when Dr Zhou took office, he has helped his country navigate the treacherous terrain of global economic and financial markets such that despite the financial crisis set off in the late 2000s (which spilled into this decade), China’s economy has weathered the storm better than many industrialised countries thanks to its over $2 trillion of reserves.

An outstanding reform-minded policymaker, analysts believe he is needed more than ever before to steer the “threatened” Chinese economy back on course. Given the alarming rate at which funds are taken out of the Asian country, its rising debt profile and the declining value of the yuan, strong public opinion may prevail on Zhou to stay. His huge experience as a financial systems reformer makes him highly resourceful and a respected voice in Washington. These and other factors have combined to make him indispensable in China’s financial circles.

Zhou grew up alongside the Chinese economy. He was among the liberal intellectuals that drew the blue-print for China to move from a command economy to a market-based one. In his words, “protectionism will lead to laziness, weaken competitiveness and retard industrial development”. He remains a proponent of an open market economy without capital restraints. Today, China is better for it as a global business and tourist destination whose industrial technology and capital infrastructure building know-how are being deployed all over the world. In 2011, Euromoney named Zhou, Central Bank Governor of the Year on account of his deft handling of an economy many investors still do not fully comprehend.

Besides, Zhou has almost revamped the Chinese banking industry by relaxing interest rates from excessive control, creating interbank bond-market, achieved a reserve currency status for the Yuan and taking the People’s Bank of China to almost an equivalent level with its American/European counterparts. The hitherto isolated Yuan has come to be reckoned as an international standard currency with relative stability.

Looking at the meteoric economic transformation in China, Christine Lagarde, Managing Director, IMF, has described Zhou as “one of the helmsmen of Chinese economy and a world-class intellect, who speaks the same language as other global leaders and policy-makers”. This is an excellent compliment from a global financial leader that speaks volume of Zhou’s status and quality of respect he elicits at that level.

From Zhou’s image-making skills, Chinese political leaders have realized that a Central Bank governor is not only a financial manager, but also an important diplomat. On this note, a professor of economics in Hong Kong University, Chen Zhiwu has said that “Zhou is the face of China for the international financial community”

Regarded as China’s most able technocrat, he is equally ranked 4th by foreign policy in the Top 100 Global Thinkers Report in 2010. Bloomberg also has him as 5th in its Top 50 Global Influencer in Finance and Economics.

Zhou’s forthcoming retirement in March 2018 is understandably a fulfillment of statutory labour requirements. But industry operators/analysts will miss the astute central banker whose presence and influence in the global financial circle many have come to take for granted.