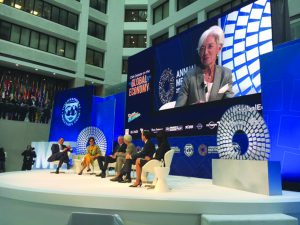 Several advanced and developing countries are engaging in tax reform not only to raise revenue but also to ensure equitable distribution of resources, say panellists at the CNN Global Debate at the ongoing IMF/World Bank annual meetings.

Canada, France and Indonesia have all embarked on reform of their tax codes to raise revenue and reduce inequality. France’s Finance Minister Bruno Le Maire says France is determined to carry out major reforms in its economy, including reform of the tax code and labour reforms. “France can do tax reform and we have introduced the most important reform in decades” he says.

He is convinced that without these reforms, the competiveness of France and indeed the entire welfare state would be at stake. Defending proposals to tax global technology giants, Le Maire says it is important to have equity and justice in fiscal policy as well as achieve tax efficiency.

Canada raised taxes on the top one percent while lowering that of middle class, says William Morneau, Minister of Finance. The aim, according to him, is to achieve the long-term of reducing inequality. It is important, he notes, to build confidence in the people than to operate an equitable tax system.

For Sri Mulyani Indriwati, Minister of Finance of Indonesia, she is concerned about tax competition among the big economies which has repercussions for developing countries. She advocates sticking with proposals by the G20 on reducing tax competitions. Expanding the tax base, she says, should be the goal of an effective tax policy while reducing tax avoidance.

Lauding the leading role played by France in taxing the technology giants, Christine Lagarde, IMF boss says it is important to include the internet giants in discussions regarding taxing them. Improving the tax base, she reckons, is more important than the tax rate.

For Gita Gonipath, Professor of Economics, Harvard University, ensuring everyone pays an effective tax rate is important and this requires closing loopholes in tax codes.