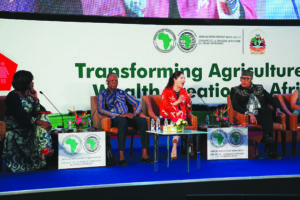 With Africa’s textile and clothing market worth more than $31 billion, the continent has all it takes to break its high dependence on foreign import of textile and clothing, was the consensus of panelists at the a seminar on ‘Creating Wealth through Fashonomics’ at the 52nd AfDB Annual Meetings.
According to Dr Celestin Monga, Vice-President and Chief Economist, AfDB, Sub-Saharan Africa has the capacity of generating 400,000 jobs and double exports in the next 10 years.

Monga noted that it has become imperative for Africa to tap its potential in the textile clothing by developing the value chains of sector.
For Ms. Helen Hai, CEO, Made in Africa Initaitive, UNIDO Goodwill Ambassador, Vice President and General Manager for Overseas investment for Huajian Group, Africa is not just a source of labour but creativity which the textile clothing industry is known for.

“Such creativity which abounds on the continent should be used to advantage in building the African economy,” she adds.

In his own contribution, Mr Sidahmed Alphadi, African Designer and UNESCO Artist for Peace, agrees that African fabrics are inspiring more famous designers. “Fashion is not just about design or inspiration. It’s also a multi-million dollar industry that creates millions of jobs, including in textile and clothing manufacturing,” he said.

The AfDB’s “Fashionomics” initiative supports the development of creative industries that utilize agricultural products, especially cotton, in Africa. Its target is to create the necessary awareness that will enable Africa promote textile manufacturing from conception and design to both regional and international markets.