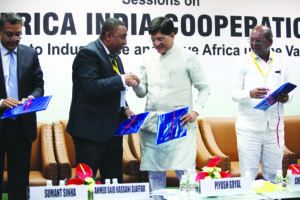 The International Solar Alliance (ISA) has been strengthened as more countries signed into it during the 52nd Annual Meetings of the AfDB. ISA, an initiative of Narendra Modi, the Prime Minister of India, had about five countries joined the renewable energy alliance.

During a section of the Africa-India Cooperation on Powering Africa – strengthening ISA and Africa -India Re Partnerships at the 52nd AfDB Annual Meetings, Mr. Piyush Goyal, the India minister of New and Renewable, said ISA was initiated by the government of India to partner other countries to provide clean energy to homes.

To him, Africa countries have to key into ISA to learn from successes made by India in generation of clean and renewable energy. He said that providing electricity to homes will eradicate poverty fast from the continent of Africa.