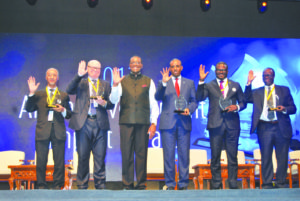 Five countries received Prizes at the inaugural Development Impact Award at the cultural event on the sidelines of the annual meetings of the African Development Bank (AfDB) in Ahmedabad, India.

The ceremony, which took place at the Gujarat University Convention Centre had in attendance, Dr Akinwumi Adesina, President of the AfDB, Shri Vijay Rupani, Chief Minister of the State of Gujarat, Shri Arjun Meghwal, India’s Minister of State for Finance among other delegates attending the annual meetings of the Bank.

The awards, according to Dr Adesina, were instituted to recognise projects that were doing the most to bring development closer to the people in tune with the Bank’s High 5 Agenda.

Award recipients were recognised for their work in energy, food production, integrating their communities, industrialisation and improving quality of life for their people.

In the ‘Light up and Power Africa’ category, Morocco won the award for its renewable energy projects that have been globally recognised as one of the largest in the world. The ‘Feed Africa’ award went to Mauritania for its effort to boost agricultural yield and food production. Tanzania triumphed in the ‘Improving quality of life’ category for expanding rural safe drinking water and sanitation. The prize for ‘Industrialise Africa’ category went to Somalia thanks to the East African Submarine Cable System (EASSY) fibre optics cable project. Ghana clinched the award for ‘Integrating Africa’ with the Fufulso-Sawla road project in the northern region of Ghana which will ultimately link Ouagadougou in Burkina Faso.
The next award will be held at the next annual meetings of the Bank in South Korea.