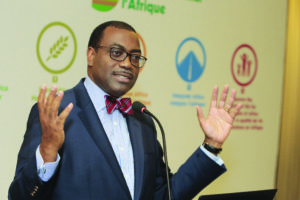 That is Gujarati for “See you next time!”

If the 3000-odd participants that graced the African Development Bank’s 52nd Annual Meetings in the beautiful state of Gujarat have picked up the local language, chances are that as they prepare to return home, they may hear that cheerful greeting from Bank President Akinwumi Adesina, whose ear for languages is in no doubt. He even tossed a few Gujarati phrases around, to the delight of the multinational guests’ delight at Wednesday’s Cultural Night Dinner at the Conference Hall of Gujarat University; and guess what; he had the savoir faire to turn up fashionably decked in the iconic “Modi” jacket!

Five days running, the cosy halls of Mahatma Mandir Convention Centre have been accommodating excited meetings participants as they traded ideas, facts, opinions and , of course, good-natured banter on African development issues; notably, how to make the most of the continent’s vaunted potential in agriculture by leveraging its comparative advantage for wealth creation.

This year’s AfDB ritual get-together attracted people of all colours, creed and tongues from the world over, professing trades and professions ranging from financial services, through economics, business, politics, engineering, academia, civil society, entertainment and, of course, media.

Participants would note that Ahmedabad 2017 broke new grounds. Focus has been heavy on the youth and women in the seminars who the Bank considers under-appreciated in economic planning in Africa. For the first time, effort was made to exploit the huge communication and PR power of the entertainment industry by incorporating stars from Africa as well as from the host country, India, in the deliberations. The Nollywood meets Bollywood idea was a smart attempt to reach the youth in a way that appeals to that important segment of society.

The AfDB rooted for Africa’s womenfolk in the meetings in concrete terms. The Bank and the World Bank’s private sector agency, International Finance Corporation (IFC) signed a memorandum of understanding (MoU) to address the challenge of poor access to credit faced by women. The financing gap for women in agriculture is reckoned to be about $12.5 billion per annum, while the deficit for women entrepreneur in general stands at a hefty $45 billion. The MoU resulting from the AfDB/IFC parley gave birth to Affirmative Finance Action for Women initiative, which will leverage $3 billion for Africa’s financially marginalized women. This is a good beginning that can be improved on as the message of women empowerment gathers momentum in the days ahead.

The choice of India is most auspicious for the meetings. India’s economy, cruising a steady 7.5 percent on the wings of the catchy Incredible India commercial and globally-visible Make in India campaign, is a beacon for Africa’s floundering economy. The meetings provided several platforms for African political and economic elite to learn useful tips from their Indian counterparts, given the cultural similarities and shared experiences of the peoples of both regions.

Prime Minister Narendra Modi put the need for continued cooperation most eloquently in his welcome address when he pledged to uphold the friendship as the two peoples, who make up a third of humanity, run “shoulder-to shoulder” in the race for development.

All things being equal, participants at this year’s meetings will have another opportunity to continue the quest for Africa’s sustainable development at the 2018 meetings in Busan, South Korea.