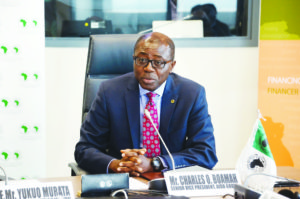 Africa’s ability to achieve its development goals rests with its ability to mobilise resources, says Mr Charles Boamah, Senior Vice President of the African Development Bank (AfDB) at a dialogue on mobilising domestic resources for Africa’s transformation. Reeling out statistics, Mr Boamah says Africa has about $100billion funding gap in infrastructure, despite having about $164billion in Sovereign wealth Fund, $333billion in pension fund and receives $64billion and $65billion in remittances and Foreign Direct Investment (FDI) respectively.

As constituted, Africa’s current resources, Boamah says, are inadequate to achieve the Sustainable Development Goals (SDGs) and AU’s Vision 2063. Incidentally, the Bank’s High 5s he notes could be used to achieve about 90percent of the SDGs and Vison 2063 but admits that the AfDB’s resources are limited to take on the challenge.

“It is important we build trust to be able to mobilise resources,” he says. Weak institutions and structural deficiencies, Boamah concedes, constitute leakages and blockages that hinder effective reallocation of resources resulting in illicit financial flows and low tax base. The AfDB, Mr Boamah says has taken steps to address challenges to domestic resource mobilisation such as the recent support it provided to Togo to reform its tax authorities which raised the country’s tax revenue by 123 percent and the establishment of African Domestic Bond Fund through the African Financial Markets initiative (AFMI).

Governor of the Reserve Bank of Zimbabwe, Dr John Mangudya says his country finds it difficult mobilising resources but says was able to raise $200million diaspora bond after the Afreximbank took on the risk. To raise more money, Dr Mangudya says they are in the process of introducing digital payment platforms that can help them formalise the informal sector. The country is able to raise about $500million monthly by leveraging its “mineral resources to borrow money or by exploiting it”. The appreciation of the dollar has taken its toll on the competitiveness of Zimbabwe exporters due to the appreciating dollar.