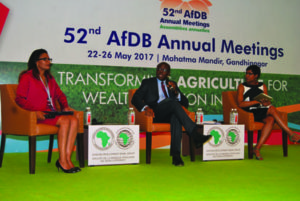 For delegates and observers that throng the meeting halls of the African Development Bank Annual Meetings, few events live up to the ratings of the Financial Presentation Luncheon. To be sure, all participants are feted in the traditional AfDB way that reflects authentic African charm and hospitality. More important, everyone comes away much wiser about the Bank’s operations, financial strength and how it goes about the business of fulfilling its mandate of catalyzing Africa’s sustainable development.

Hardnosed business types would be pleased that 2016 turned out to be a fairly good year all round for the Bank in spite of the slow-down in the global economy, which caused Africa’s growth rate to drop to 2.2 percent. It was the slowest pace since the global financial crisis that erupted in 2007/8.

Total income from loans and investments went up almost 18 percent to $720.56 million from the preceding year’s $612.72 million (taking 1 UA = $1. 34433). Net operating income for the year went northwards, posting $351.53 million against $308.73million, representing a 14 percent improvement.
Net income for the year was a modest $33.7 million, which was a big relief for all who were unhappy with the (-) $41,46 that marred 2015’s numbers.
Interestingly, the full story of the Bank’s performance is hardly told by the foregoing numbers from income statement alone. As Senior Vice President Charles Boamah says, the development institution is obliged to measure its efficacy by how meaningfully its operations impact the lives of the people of Africa on whose mandate it relies. The Bank’s borrowing activities reached their highest level ever in 2016 with an overall funding programme of $11 billion. Giving further clarifications on the principles that guide operations and in-house performance appraisal, Boamah reveals in the introduction to the financial highlights brochure that “the Bank continues to prioritize capital preservation and liquidity as the primary objectives, followed by returns.”

In the period under review, total approvals for funding grew from 8778 to 10 802, reflecting the pressure of growing demands from member states. It could not be any different. The Bank itself has set very high goals for itself and the continent with the High 5 Agenda, which seeks to move the entire continent to seek resources to meet five key challenges that have chained Africa down at the very bottom of global development totem pole.

It is soul-lifting to note that the world is gradually warming up to the continent and its struggle. The United Nations Development Programme (UNDP) recently lauded AfDB’s High 5 Agenda, pronouncing it sound enough to help Africa achieve up to 90 percent of the Sustainable Development Goals (SDGs) if well funded, propagated and implemented.

For AfDB, that should not be too difficult a task. The Bank retains its AAA credit ratings and can continue to depend on its 80-odd member countries to fulfill their financial obligations to it. The Bank is getting busier by the day in the international financial markets, having successfully launched its first Euro benchmark transaction last year in pursuit of its need to diversify and grow its sources of funding.

The next hurdle should be a renewed effort to encourage African governments and policy makers to pursue fiscal discipline, good governance and sharpen their appetite for inclusive growth.