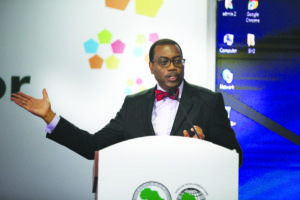 African Development Bank (AfDB) President Dr Akinwumi Adesina is nothing if not a persistent man. And that is good not just for the pan-African multilateral development institution he runs but also Africa, which relies on the institution to help galvanize resources for sustainable growth and development in a an increasingly complex world.

At the press conference heralding the commencement of the AfDB Group’s 52nd Annual Meetings, holding in Ahmedabad, India, Dr Adesina regaled the pen confraternity with his vision of Africa as home to billionaire farmers, visibly proud enough to make agriculture a business that attracts creative entrepreneurs as does ICT. The Bank boss had had the same dream for Nigeria, his home country when he served as Minister of Agriculture. He had won the prestigious 2013 Forbes Man of the Year Award on account of his exceptional performance and vision. Four years on, the development economist insists on seeing the dream through on a bigger scale as AfDB’s helmsman. Excerpts:

What is the state of the African economy today?
Africa’s economies have been growing roughly at 5 percent in the last decade. However, recently because of the fall in commodity prices, the growth has slowed down a little bit. The African economy grew at 2.2 percent but our projection based on the reforms that we have just launched shows that the African economy will grow at 3.4 percent this year, and will rise to 4.4 percent in 2018. Now you have to put in perspective the growth of the global economy. The global growth rate in terms of GDP growth in 2016 was 3.1 percent. For this year, it is projected by the IMF to reach 3.4 percent and it will reach 3.7 percent by 2018. So, that tells you that African economies are doing relatively well in a very challenging global environment. One thing I want to say is that Africa is not just one country; it is a continent. Africa is actually quite heterogeneous when you look at the countries themselves.

Let me give some numbers that will really shock you. Cote d’Ivoire is growing at the rate of 8.3 percent, Ethiopia at 8 percent, Kenya at 6 percent, Rwanda, 6 percent, Tanzania at 7.2 percent, Djibouti is 6.3 percent, and Senegal is 7.2 per. That just tells you that you cannot generalize when it comes to Africa. Our economies are performing well. In fact, four of the five fastest-growing economies in the world are in Africa today. Let me also say that when you take a look at it in honesty, 14 countries grew last year above 5 percent, and 18 countries grew at 3 to 4 percent. That also tells you how much diversity you have in the growth process in Africa. African economies are doing quite well and they are quite stable and very resilient.

What informed the choice of India as the host of this year’s AfDB meetings?
Let me say that India was chosen because the theme of this year’s meetings is how to make agriculture a viable business. India has shown the rest of the world how it took its agriculture from where it used to be (dependent on food import) to becoming totally self-sufficient in food in just three years. It just tells you what can happen when there is the political will, and so we are here to draw inspiration from that Green Revolution in India and also encourage African countries that they can adapt the Green Revolution to the African situation.

Why did the Bank decide to focus on agriculture in its 2017 Annual Meetings?
Agriculture is so crucial for Africa because the continent is spending $35 billion to import food today and if we don’t do anything, the amount that Africans spend in importing food may arise to $110 billion by 2025. I am sure you will agree with me that, that makes no sense.

Africa should not be importing food; rather, the continent should be a net exporter of food. Why? I don’t plan to be around by 2050. I don’t know how things are going to be by 2060 and 2070, but I do know what can change in the next 10 years. In the next 10 years, Africa will have to absolutely feed itself. It has to turn that around and that is why this year’s Annual Meetings is very important.

Could you give us an insight into AfDB’s High 5 agenda and its transformational impact in Africa?
The High 5s agenda is very important to the Bank. The five pillars of what we call the High 5s are ‘Light-up and Power Africa’, ‘Feed Africa’, ‘Industrialize Africa’, ‘Integrate Africa and improve the quality of life of the people of Africa’. In this year’s meetings, we are focusing on the issue of ‘Feed Africa’. Let me also say few things about ‘Feed Africa; and the areas you will be hearing from us in the next few days. You will be hearing what we are doing to encourage young people to get into agriculture as a business because I believe that agriculture is the coolest thing that you can ever have.

The second thing I want to say is how to make agriculture a huge business by unlocking its income benefit for the people of Africa. Why is this important? It is important because the size of the food and agricultural market in Africa will rise to $1 trillion by 2030. That tells you that it is where the billionaires from Africa should be coming from.