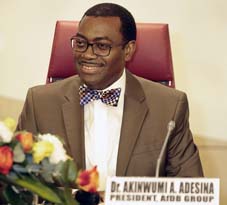 Speaking at a high level programme which focused on Africa’s nutritional challenge at the ongoing annual meetings of the Bank, Adesina is miffed that 280 million Africans are malnourished while 58 million children are stunted with dire consequences for their later-life chances. He added that 14 million children are wasted and another 10 million are obsessed.

He called for a holistic approach to the way malnutrition is tackled so that it is not just seen as a health or agriculture issue but as a development concern that should encompass responses from critical ministries and agencies of government, including finance, economic and planning ministries among others.

Dr Mohammed Ali Pate, Chief Executive Officer (CEO) of Big Win Philanthropy, finds it hard to be optimistic when children go malnourished. He cautions that growing food is not sufficient to check malnutrition. “To tackle malnutrition, it needs to be politically appreciated,” he said. He noted that Africa’s Vision 2063 would just be a pipe dream if malnutrition was left unchecked.

Nutrition unfortunately takes just one percent of the donor resources that pour into the continent, according to Shawn Baker, Director of Nutrition, Bill and Melinda Gates Foundation.