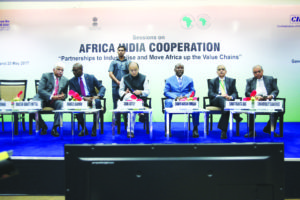 The Export-Import (Exim) Bank of India must re-examine its financing strategy in Africa to make meaningful impact on the development efforts across the continent, says Dr Joseph Sanpha Koroma, founder and chief executive officer of the United Trust Bank (UTB) of Sierra Leone.

Koroma, a former Governor of Sierra Leone Central Bank, gave this homespun analysis of Exim Bank of India’s financing during a session on Africa-India Cooperation on the sidelines of the annual meetings of the AfDB.

He is pained that efforts by UTB to secure financing credits from Exim Bank of India for vital development initiatives in his country has been frustrated, hence his decision to seize the opportunity of the forum to demand for review of the strategy. Koroma believes the experiences of other finance institutions are the same.

“The strategy of the bank (EximBank of India) as far as channelling funds through financial institutions must be re-examined if India strongly wants to make an impact on financing development in Africa. You cannot finance development without going through banks and can only do so effectively through private banks,” Koroma said.