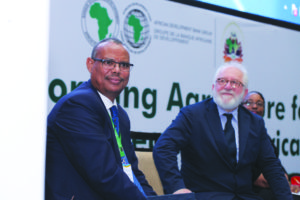 Africa’s economic growth slowed to 2.2 percent in 2016 down from 3.4 percent in 2015 as falling commodities prices weighed on commodities exporters, according to the recently launched African Economic Outlook (AEO) with the theme: Entrepreneurship and Industrialisation, at the ongoing AfDB annual meetings.

Regional and global headwinds, the report says, resulted in uneven growth performance with net commodity exporters such as Nigeria and Angola enduring a difficult year which also saw their currencies losing value. However, non-commodities exporting countries benefited from the falling commodity prices and continued to grow while consolidating previous years’ gains.

Growth is, however, expected to improve to 3.4 percent this year and 4.3 percent in 2018 as commodities prices recover.

In his presentation, Dr Mario Pezzini, Director, OECD Development Centre says Africa will grow if it can nurture and develop its entrepreneurship base because small firms create most jobs but they lack innovation since most of them focus on non-tradable sector.