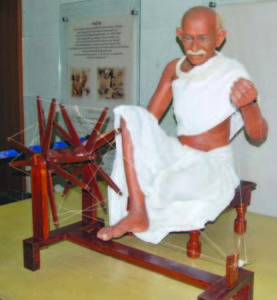 The life-like figure of the slightly-built man draped in a simple white calico wrap, hard at work on a hand-loom cannot fail to hold your attention, as you walk into the expansive interiors of the Mahatma Mandir International Convention Centre, in Gandhinagar, the venue of AfDBAM2017. The sculpture reminds one of Madame Tussaud’s wax works which attract millions of visitors in London and New York on and off tourist seasons in those cities.

But the iconic figure of Mahatma Gandhi, India’s national hero, is more than just a curiosity. It evokes the spirit of self-determination and industry at the grassroots, the Gandhian philosophy on which India’s fast-growing emerging economy is built. Africa, which shares India’s antecedent as a colonised land that has attained freedom could use a dose of that philosophy. That, apparently, is the wisdom behind this year’s choice of venue for the African Development Bank (AfDB) Annual Meetings with the matching theme: “Transforming Agriculture for Wealth Creation in Africa”.

Bank President Dr Akinwumi Adesina is totally sold. “I take my inspiration from Mahatma Gandhi,” he says, in wanting to “be the change I want to see in the world”, referring to the Mahatma’s philosophy of leading by example, so simply but eloquently depicted in the captivating sculpture at the conference centre’s entrance pavilion. Just as India is ‘wowing’ the world with a racing economy, based on its own resources — human and material — Adesina wants Africa, equally endowed with much potential and opportunities, to “win its own place in the world’s workshops and market places.”

As the jaw-jawing sessions and exciting deliberations continue today, delegates and observers have until Friday to process information, share knowledge, weigh the variegated opinions of colleagues/ discussion partners and, of course, take in the example of “Incredible India” for the good of Africa.