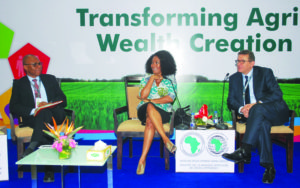 Moderator Alan Kasujja wanted “it said it is.” He would have it no other way. He knew the topic of the seminar was Transforming African agriculture into a Lucrative Business but he wanted to know how to actually make money from agriculture.

In the lively, racy session he coordinated, Kasujja got everyone involved, allowing members of the audience as much to say as the refreshingly eloquent panellist Ada Osakwe, the Nigerian entrepreneur and CEO, Agrolay Ventures, who made a name as a World Economic Forum Youth Global leader.
Everyone really wanted to know how to make money from agriculture, not least Khaled Sherif, AfDB Vice President, Regional Development, Integration and Business Delivery who set the tone and context for the parley.

The AfDB, Sherif says, isn’t happy that though agriculture and agribusiness together account for about 45 percent of the economy of sub-Saharan Africa, their share of GDP are 24 and 20 percent respectively due to notable constraints and underperformance in the agriculture sector. This causes Africa to import as much as $35 billion worth of food annually even though 66 percent of the world’s uncultivated land is to be found on the continent. Close to 90 percent of the world’s cocoa for instance comes from Africa, but less than 10 percent of all income from cocoa and its derivatives, including chocolate, comes to Africa.

Bad rap for Agriculture
Agriculture in Africa has gotten a terrible rap. The youth would not hear of it, denigrating farming as work for illiterate rural folk. The average age of the African farmer is put at 60 years; a cause for concern to everyone as the elderly cannot be relied upon to feed Africa’s growing population.

Osakwe believes the solution lies in taking agro-processing, “the lynch pin in the value chain” seriously, backing up her position with the success of her company. The packaged foods industry, she reckons, is worth a mind-boggling $3 trillion per annum. That is a way out for those who think farming is “drudgery”. The idea is to make agriculture less energy-consuming and more financially rewarding.

Several members of the audience gave great testimonies of successes in agri-business. But many acknowledge some problems with access to finance, land ownership and dearth of modern equipment and poor infrastructure.

Solutions to these problems were taken up by Chiji Ojukwu, Director, Agriculture and Agro-allied-industry of the AfDB, who unveiled the institution’s agriculture promotion initiative incorporating seven enablers which will help improve productivity, viz.; encourage and fund processing businesses; invest in roads, rails and other infrastructure that enhance agriculture; improve access to agriculture finance; encourage youth and women participation; and get governments and businesses to partner on agri-business-related legislation and incentives.

Better stats, please
Solution to the most controversial hurdle of all — access to finance — may be the contribution from a Kenyan agricultural finance company executive. She blames African farmers’ inability to keep credible data or records of their business such as accurate land-holdings, acreage for various crops, volumes or tonnage of harvestable produce, estimates of costs or income from such acreage and inputs to help the financing firm reach a decision to lend or decline extending credit.

All the challenges will be weighed and turned inside out in the days to come as the AfDB meetings gather momentum en route to figuring out how to transform African agriculture into a wealth creator.