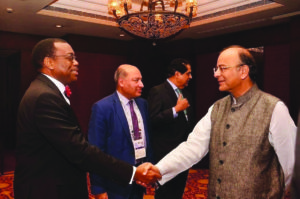 With China intensifying and consolidating its economic presence in Africa, India sees the world’s largest Africa-focused economic-financial gathering as a platform to court AfDB regional member- countries and deepen its economic engagements on the continent.

Expectedly, Dr Akinwumi Adesina, the AfDB president views the Ahmedabad meeting as a crucial platform for African economic leaders and business players to engage their Indian counterparts and other development actors. He also considers it an avenue for them to tap into the Bank’s High 5s and its new Development and Business Delivery Model.

“I am very bullish about Africa-India relations,” says Adesina, adding that the AfDB would launch an Africa Investment Forum this year in which the Exim-Bank of India can participate.

For the Bank boss, the meeting provides a much-needed fertile ground for facilitation of greater business engagements between Africa and India.
Renewable energy is a major area of interest the Bank is looking forward to getting Indian support after 47 other countries had committed $10 billion to the Africa Renewable Energy Initiative.