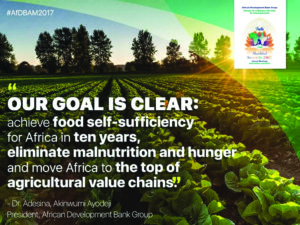 Africa is facing a malnutrition crisis and will need assistance to overcome the challenge. A recent United Nations report was that about 20 million people in northern Nigeria, South Sudan, Somalia and Yemen face famine and highlights the urgency of fixing Africa’s broken agriculture.

The statistics are as sobering as the future faced by malnourished children. According to UNICEF, in 2016 about 155 million under-five children worldwide were stunted while about a third of the malnourished live in Africa. This presents huge costs to society and individuals estimated at $25 billion for sub-Saharan Africa. The World Bank says malnutrition presents enormous barriers to individuals and societies in realising their full potential as well as magnifies the effect of diseases that affect later-life chances.

Conflicts have been largely blamed for malnourishment as internally displaced persons, especially children and breastfeeding mothers, are consequently underfed and deprived of necessary nutrients. Malnutrition also affects educational development of affected children who go on to earn 20 percent less as adults than their peers.

Climate change and underinvestment in agriculture are other factors that play a significant part in the food insecurity story on the continent. The African Development Bank (AfDB) says Africa spends a whopping $35 billion yearly on food imports despite being home to 65 percent of the world’s undeveloped arable land.

Little wonder the AfDB is investing $24billion in the next 10 years through its “Feed Africa” strategy to develop the value chain of 15 key agricultural produce. “What Africa does with agriculture is not only important for Africa: It will shape the future of food in the world,” says Akinwumi Adesina, AfDB President.

The AfDB is rapidly deploying about $1.1billion to address the severe food insecurity and malnutrition crisis facing drought and conflict-hit countries.