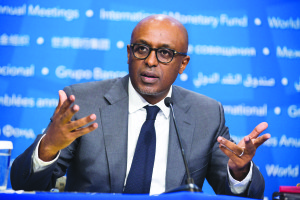 Africa will witness its lowest economic growth in the past 20 years. The International Monetary Fund (IMF) is projecting a growth rate of 1.4 percent for the Sub Saharan Africa in 2016. This is lower than 2015 growth rate of 3.5 percent and much below the five percent average growth it enjoyed between 2010 and 2014.

Two factors were responsible for the continents low growth rate were the slump in commodity prices and the tightening financial market condition. These factors were not helped by sluggish policy response of countries that were mostly affected by these shocks. The effect, according to Abebe Aemro Selassie, director, African Department, IMF, is heightened uncertainty that discouraged private investment and stifled new sources of growth.

The worst hit were countries that relied on commodity exports like Nigeria, Angola. In these countries the strain has worsened significantly in recent years and have spread to the non-oil sectors of their economies. Conditions are also difficult in South Africa, which relies to a significant extent on commodity trade.

Yet, hope for a brighter economic future for the continent is not gone. According to Aemro, the regional aggregate of number of 1.4 percent growth this year considerably masks the diversity that prevails across the region. “I think we should guard against swinging from strong optimism of recent years about the region’s economic prospects to the excess pessimism that seems to be seeping in,” Aemro says.

Nineteen out of Africa’s 45 countries would record robust growth of six percent or more in 2016. They include Cote d’Ivoire, Ethiopia, Senegal, and Tanzania. “Looking ahead, we are projecting a modest pickup in economic activity. We think this is possible as long as strong action are taken,” Aemro says.

However, reforms being initiated in the coming months could see growth moving up to three percent in 2017 and beyond.