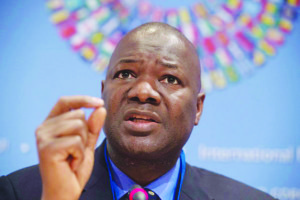 At a high level meeting on Catalysing Private Finance for Development, Dr Kaifala Marah, Governor, Bank of Sierra Leone apparently spoke the mind of the audience when he countered the position of the World Bank President, Dr Jim Kim about the lack of absorptive capacity in Africa.

The World Bank President had earlier in his opening statement talked about the need for inclusive approach to mobilising resources from both the public and private sectors for development but is worried that in several low-income countries , there is lack of absorptive capacity for even the resources due to a lot of local bottlenecks.

Dr Marah in his contribution acknowledged the challenges which many developing countries particularly in Africa are facing which include huge deficits in infrastructure, illicit capital outflows, but also mostly the challenge of perception. It was at this point he told the audience that the African narrative in particular is changing and that, the existing quantum of funds available to some of the multilateral institutions such as the International Finance Corporation (IFC) are grossly inadequate to meet the funding gaps for development. He particularly warned that some of these issues have implications for migration and the World Bank’s lofty goal of halving poverty by 2030.