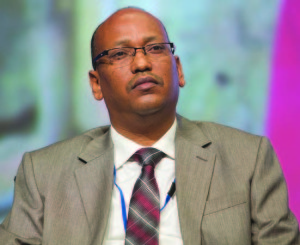 The expertise and experience of Ato  Abdulaziz Mohammed, Ethiopia’s Minister of Finance and Economic Cooperation is visible not only in providing  economic direction for the country, but also in how finances are deployed to fund  government  projects. This has helped to  fast-track the implementation of the  second phase of the country’s home-grown development blueprint the Growth and Transformation Plan  (GTP II).  In the discussion with AnnualMeetings Daily excerpted below, the honourable minister speaks on how the entire government machinery is firing on all cylinders, pushing towards actualising the grand vision of placing Ethiopia in the league of middle income economies by 2025.

What efforts are being made to reach the laudable goals of becoming a middle-income economy with a zero net growth in emission by 2025?

The government of Ethiopia is very clear on the current and future impacts of climate change on society, economy and ecosystems. There is a deep link between environment and socio-economic development of the country and government is taking steps to galvanize action locally and globally by adopting the Climate Resilient and Green Economy (CRGE) strategy. Ethiopia plans to reduce 64% of the national greenhouse gas emission by 2030. This is despite the fact that Ethiopia contributes only 0.02% of global emissions, 76% of its population lack access to electricity, and that 72% live on less than $2 per day.

The Environmental Council, chaired by the Prime Minister’s Office and comprising members from federal ministries, presidents of regional states, and private sector and civil society representatives provides overall oversight and responsibility for the realization of the CRGE Vision. Line Ministries have also established CRGE units, with the overall responsibility of coordinating and facilitating the planning and implementation of sectoral CRGE strategies. The former Environmental Protection Authority (EPA) has been upgraded into Ministry of Environment, Forest and Climate Change to technically coordinate the delivery of the strategy.

Preliminary estimates indicate that Ethiopia should invest over US$ 150 billion to realize its vision of building a low-carbon and climate resilient middle-income country status by 2025. This is equivalent to an annual invest of US$7.5 billion to make the economy climate-smart and ensure the sustainability of economic growth.

Poverty reduction features prominently in the GTP and government’s objective is to reduce the poverty considerably by 2020. How quickly can this be achieved?

I am happy to say that Ethiopia has come a long way from the 1970s when the country was associated with poverty and deprivation. The world now recognises Ethiopia as a fast-growing well-governed democracy on the path of sustainable development. We have since jettisoned the policies of the socialist Dergue regime which resulted in extensive and severe poverty. The current government, under the Ethiopian People’s Revolutionary Democratic Front (EPRDF) reversed that trend by changing from command economy to market-oriented economy. The ultimate objective of economic growth has been poverty reduction. To this end, economic policies and strategies designed and implemented in this country have been pursued within the perspective of government’s poverty reduction objective.

Apart from electricity, what other area is government focusing on in the quest to industrialise the country?

Infrastructure development for Ethiopia is an important factor in achieving sustainable, fast and inclusive, as well as environment-friendly growth. We have realized that an efficient transport system for improved industrial and agricultural productions led by the private sector is a prerequisite for economic growth and development.

Priority has therefore been accorded road construction and development as it has multifaceted benefits in accelerating industrial development.

Next, we boast industrial parks which make land and facilities available for industries and export development. The parks are eventually transferred to private investors with utmost transparency and accountability. Consequently, costs of production and services delivery will be reduced, productivity increased and competitiveness enhanced.

In recognizing the importance of information and communication technology (ICT) as an important ingredient of economic development, we are expanding the ICT network to accommodate the latest information technologies, and improving quality and coverage.

Agriculture is the lifeblood of most developing economies including Ethiopia. What is being done to scale up investment in the sector?

To attract investors in agricultural sector the government offers incentives such as duty-free importation of goods, tax holidays, access to affordable lease holds and access to finance from a Development Bank. Regarding institutional support, it has established the Ethiopian Investment Agency which is a focal point for investment facilitation and promotion. In addition to this, there are several institutions which support the modernization of both small-scale and large-scale farming. Research institutions in the public and private sectors have been playing a crucial role in providing hybrid seeds, irrigation techniques, farming methods and crop shifting system to farmers.

Over the last decade, Ethiopia has continued to post strong, broad-based growth, expanding by a mean of 10.8 percent, which is more than twice the regional average. How sustainable is this high growth rate going into next decade?

Ethiopia has been registering rapid, broad-based and equitable economic growth and development during the last decade. This resulted in the significant rise in real per capita GDP and a dramatic drop in the national poverty and unemployment rates. Non-monetary dimensions of well-being have also improved, including in the rural areas. Based on the Human Development Index (HDI), Ethiopia has been successful in translating economic growth into higher living standards for its citizens, and consistently maintaining fair distribution of income. In the next five years, the aim is to sustain the growth acceleration and to make the economic growth even more inclusive and equitable. We are proud that we have achieved all this through our home-grown development polices, strategies and plans. In sustaining the growth momentum, we will focus on enhancing and utilizing the country’s competitive advantages and ensuring participation in the world economy.

What’s the outlook for Ethiopia’s economy in the next five years?

In the next five years, it is projected that GDP will grow on average by 11 percent per annum. We hope to sustain the broad-based and double-digit economic growth by eradicating poverty and reducing unemployment. Structural transformation will be achieved through expansion of the manufacturing industry and value addition, technology transfer, agricultural transformation, export promotion, sustainable urban development, sector wide capacity building and expansion of micro and small scale industry.

We envisage a sectoral average growth rate of 8 percent per annum for agriculture, 20 percent for industry and 10.1 percent for services. The industrial sector’s share will rise from 15 percent in 2014/15 to 22.3 percent in the next five years.

Consequently, the share of agricultural sector in GDP is projected to decline to 33.5 percent in 2019/20 financial year from 38.5 percent posted in 2014/15. The share of the service sector is projected to decline slightly to 44.3 percent from 46.3 percent in the same period. The proportion of the population living below national poverty line is expected to fall from 23.4 percent (2014/15) to 16.7 percent by the end of 2019/20.