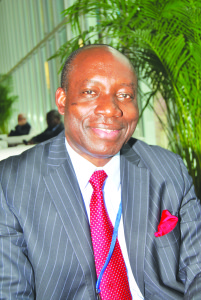 Prof. Chukuma Soludo is the Chairman of African Heritage Institution and the Paragon Mining Group. The Professor of Economics was Chief Executive National Planning Commission and Economic Adviser to the President of Nigeria, who went on to become Governor of Nigeria’s central bank. Soludo revolutionized the country’s financial system with a hugely successful bank consolidation programme that put the Nigerian banking sector on the global stage. He is currently, among other interests, pursuing a passion in the African mining sector. AnnualMeetings Daily’s Osaze Omoragbon caught up with him during the 2016 IMF/World Bank meetings. Below are excerpts of his take on current issues in the global economy.

There has been a push back against globalisation with the greatest shock being the Brexit.  What is your take on the rise of protectionist sentiments?

I think the world is filled with all kinds of clichés, fads and fashion. Today the world is against globalisation and tomorrow it is against immigration. The problem is that there is a general misconception of what globalisation is all about. Globalisation is simply the interconnectedness of the global economic system. We are interconnected by technology, trade, and capital mobility. One of the asymmetries of globalisation is that productive assets such as human skills and capital are mobile across borders but the large chunk of the populace is constrained within borders in terms of jobs and this, breeds tension.

What is the alternative?

Should we erect barriers to trade and live in self-sufficiency? Unfortunately that is not possible. Globalisation has become a fact of the interconnected world in terms of technology and the global knowledge pool. The tensions are bound to subsist and we can only overcome them with better global governance infrastructure as well as better coordination of policies in recognition of our shared humanity. Globalisation is not supposed to be a zero-sum game. A fairer arrangement will undercut some of these tensions.

Many countries’ monetary and fiscal policies do not have mechanisms to extract surpluses from the richer world to make necessary capital and infrastructure investments in those countries that are left behind. So, if we leave globalisation entirely to the market, we would have an underperforming system because there will be clusters of market failure. This is because initial conditions matter. There are places that have taken off ahead of the others. For example, if the USA and Honduras were to compete, Honduras will end up being just the importer of technology and other manufactures from the United States. They will never be able to grow on the value-chain. Some of these countries setting the rules of globalisation grew rich behind the walls of protectionism. Today under the WTO rules, several of those pillars that supported the rich world are no longer available for the poor countries to lean on. This is the root of the tension that we are now seeing. Globalisation is not a race to the bottom. People need to understand what aspect of globalisation they oppose and avoid a blanket demonization of the phenomenon.

Talking about growing value-chains, there is talk of premature de-industrialisation in Africa. Many believe Africa can jump from agriculture, for example, straight into services. Unfortunately, many countries in Africa are already at that stage of development. Nigeria is already at that point. I call it dysfunctional diversification because we have gone from the productive activities in primary commodities into the services, bypassing manufacturing and industrialisation. That is typical of a rent-driven, consumption-oriented economy that extracts resources just to live the good life.  This is where services come in.

Is that a right approach to development?

What should Africa do to manage risks of capital flows?

They need to institute speed bumps against capital surges. For that, you need macroeconomic stability. For example, inflation needs to be under control. It is when inflation is under control that investors will bring in capital and be prepared to lock it in for a period of time. You can then have a mechanism that helps to lock  investment capital in, say, government bonds or treasury bills, with an exit tax for example to hold down the money.  Investors know upfront that they will pay a tax to take their money out.

The challenge is the failure of global coordination. What I have just said would be optimal in a regime where everyone has coordinated action on this. But if you are complying while others offer unfettered and easy capital mobility, you short-change yourself especially when you don’t have an advantage of rate of return that will keep capital in your country. You then find capital finding its way to other countries. Because there is no coordination each country is designing policies to out-compete others. The result is an overall lenient cross-border capital flow regime, which has its costs.

The Chinese currency, the Yuan, was recently added to currencies that make up the Special Drawing Rights by the IMF. What is the impact of this on exchange rate stability?

The Yuan needs to grow consistent with the size of Chinese economy to become one of the reserve currencies. It needs to grow significantly like other currencies in the basket to become a major international reserve currency. In the basket, it accounts for just about 10 percent and that is not very significant. We would like to see a more competitive international reserve system because it has implications as well for the problem of correspondent banking relationships in the world; i.e. the payments settlement system. A unipolar world where settlement is dominated by the dollar is risky for everyone. I would dare to say dangerous, really. That is leading to a situation where some jurisdictions are excluded and correspondent banks can cut off some jurisdictions which are left stranded. So, we need a competitive international reserve system. Getting the yuan into the SDR is an important first step but it needs to grow to compete with the dollar.

Many still view mining as controversial especially when foreign investors dominate the industry in developing countries. Do you think politics is standing in the way of sensible policies?

Africa is obviously blessed with lots of mineral resources. But Africans must stop complaining and get into the sector because it is the major resource of Africa. We have a responsibility to develop that sector. Otherwise we will only keep complaining about foreigners taking over mines to no end.

African governments must design policies and regulations that take into consideration the fact that Africans have a major disadvantage in terms of operating in the mining sector because the major international operators have been involved in it for over 100 years.

A system designed to suit foreigners will hamper Africans’ effort to enter the sector. We must have a process and a regime of affirmative action in the mining sector.   A level-playing field will not favour Africans who are yet to build competencies and know-how as have foreign corporations. We should remember that mining remains the dominant sector for Africa and we must take charge through some differentiated policy regimes, incentives that encourage African investors to get involved.  We have what it takes to change the operating procedure, the landscape and the story. Only then will mining in Africa be by Africans and for Africa.