Is Globalization imperilled? What is the future of trade in today’s increasingly uncertain economic atmosphere? 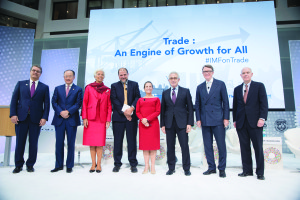 These are the questions bothering the 5000-odd attendees of this year’s IMF/World Bank meetings. The posers also challenged the collective wit of panellists chosen to ponder the possibility of “Making Trade an Engine of Growth for All” yesterday, Friday, October 7, 2016.

World Bank President Jim Yong Kim set the discussion ball rolling when he reminded all that trade has helped grow the world economy in the past quarter century like never before. His counterpart at the IMF, Christine Lagarde is miffed that despite the role trade has played to promote global prosperity, many are now aggressively turning against it. “Trade has become a political football and advocates of openness and integration are playing defence,” she had lamented at the meetings’ plenary session.

First, discussants at the seminar took time to establish the link among politics, globalization and trade in the fast-paced society driven by the digital revolution, and agreed with Chrystia Freeland, Canada’s Minister of International Trade that anti-trade protests popping up around the world are actually “complaints about the bigger ill of failure of policy,” and not anger with trade or globalization per se.

Peter Mandelson, former European Union Trade Commissioner is angry over governments that are “talking politics rather than addressing people’s fears”. Politics, he says, is remaining stubbornly national; not coming to terms with the economics of globalization.

“Politics made globalisation,” he asserts and “politics may unmake globalization”. Mandelson wonders why politicians can’t understand that inequality engendered by unchecked, unguarded “globalization” is the problem.

He has an ally in Ernesto Zedillo, former President of Mexico and co-editor of the forthcoming publication “Trade in the 21st Century”. He discounts the blame game against trade and so-called backlash against globalization as “baloney” and decries politicians’ penchant for evading responsibility for weak policies on socio-economic issues such as tax reforms and redistribution of wealth.

This, perhaps, is what Mandelson means when he supports Brexit. “Equitable globalisation is what the people want, not an end to globalization,” he says. It is probably what the vociferous supporters of Trump’s presidential dream mean when they lash out at such trade deals as Trans-Pacific Partnership (TPP) and the North American Free Trade Agreement (NAFTA), as well as immigration.

Freeland is of the opinion that the anti-trade lobby can be pacified with more openness and honest dialogue with the people, about the obvious benefits of trade and globalization. Canada, she says, gets the people “involved” through grants to small and medium sized enterprises encouraging them to exploit the export market.

Unable to resist a little sideswipe at a notable political figure’s recent statement, Freeman ends with a flourish: “the way to prosperity is to build bridges, not walls.”