The AfDB, he says, will continue the counter cyclical role of supporting the budgets of African member countries negatively impacted by prevailing low commodity prices. This is made possible, says, by the retention of the AAA long-term ratings accorded by Fitch and other agencies, which have made possible the various partnerships that keep the Bank solid with strong liquidity profile and sound capital adequacy in spite of the difficult global operating terrain.

Boamah elaborates on some of the AfDB’s main programmes including Africa 50 Infrastructure Fund which has so far pooled over $700 million from 23 countries. Excerpts: 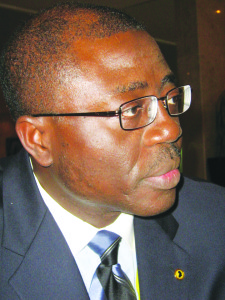 What efforts are being made to accelerate the impact of the AfDB’s 10- Year Strategy?

To continue delivering on its value proposition and help Africa meet the Sustainable Development Goals (SDGs) and other commitments to global development agendas such as the Climate Change Conference of Parties (COP21), the Bank Group, guided by the objectives of the Ten Year Strategy, will selectively scale-up results in five priority areas as follow: Light up and Power Africa; Feed Africa; Industrialize Africa; Integrate Africa; and Improve the Quality of Life for the people of Africa. In working to achieve these objectives, a number of institutional reforms are being implemented by management through a newly adopted Development and Business Delivery Model (DBDM). The DBDM is aimed at improving the Bank Group’s proximity to clients, achieving greater cost-efficiency in its operations, and, most importantly, maximizing its development impact on the ground.

How does the AfDB intend to raise the funds required to achieve set goals in the priority areas of the High 5s to fast-track Africa’s transformation?

The basic idea of the High 5s is smarter partnerships with all relevant partners, as the scale of financing required dwarfs the ability of any single development partner.  Accordingly, the Bank will increasingly use its risk capital in ways that encourage substantially more private sector participation in development projects in Africa.  This also includes spending substantially more on knowledge dissemination, to help cure misperceptions of risk that often stand in the way of greater flows of development resources to projects in Africa.

‘Feed Africa’ is one of the pillars of High 5s initiatives of the AfDB leadership. In what ways would the Bank ensure that farmers have access to long-term loans to increase their productivity?

To fund the Feed Africa Strategy for African agricultural transformation, it will be necessary to help investors identify and vet opportunities and, more importantly, to develop innovative de-risking and other instruments with which to catalyze private sector financing.

The Bank, working with its key partners including KFW, IFC, IFAD, Africa Risk Capacity, MFIs, Participatory Microfinance Group for Africa (PAMIGA), etc., intends to put in place a comprehensive portfolio of instruments and mechanisms that address the challenges of risk and cost to serve agriculture and agribusiness, as well as support catalyzing greater investment into the sector. Some aspects of the Feed Africa Strategy involve leveraging existing AfDB activities and mechanisms: an existing Soft Commodities Finance Facility housed at the AfDB will be scaled up to provide trade finance to agricultural exporters, while existing direct agribusiness investments and support to private equity funds targeting agribusiness and agro-industry − such as recent investments in Agri-Vie − will be replicated and scaled.

Moreover, the Bank and its partners will support the development of financial infrastructure and systems to reduce financial institutions’ costs of serving the agriculture sector. Furthermore, the Bank will support the scaling and development of credit bureaus, as well as associated innovative ways to collect data for the purposes of credit scoring.

It is estimated that about $6 billion illicit capital flows annually. How can this haemorrhage be stopped?

While the figures on the quantum of resources Africa loses to illicit flows vary, what is clear is that they are large and deserving of close attention and action.  According to the report of the High Level Panel on Illicit Flows chaired by former South African President Thabo Mbeki, Africa is estimated to have lost in excess of $50 billion per annum over the period since the year 2000.

To put this into perspective, it is estimated that Africa needs approximately $100 billion per annum to close its infrastructure gap and if resources currently being lost to illicit flows were properly channelled, these would have been sufficient to meet half of that annual requirement firmly putting Africa on the path to structural transformation while also adding one to two per cent additional points to current economic growth.

Recognizing the debilitating impact on development, the African Development Bank has proposed its own policy for combating illicit flows in Africa essentially tightening fiduciary safeguards and internal controls to ensure that the lending from the Bank group is used for its intended purposes. The policy also seeks to strengthen the capacity of Regional Member Countries (RMCs) to establish financial intelligence units to combat illicit activity while also supporting regional bodies engaged in anti-money laundering efforts.

Another aspect that is of equal importance is the promotion of greater transparency in ownership and control of companies, partnerships, trusts and other legal entities. And lastly, being wary of double taxation agreements which contain provisions that are harmful to domestic resource mobilization and can be used to facilitate illicit financial outflows.

The AfDB has continued to post impressive financials despite the tough international environment. How have you been able to achieve this feat?

Indeed the global environment remains challenging, particularly the downward pressure on income due to historically low (sometimes even negative) interest rates. The resilience of the Bank’s performance is largely attributable to the strength and quality of its portfolio, strong capital and shareholder support in various ways, prudent, financial and risk management policies practices, the quality and experience of its staff. In 2015, our total commitments grew by 25 per cent to reach $8.8 billion, from $7 billion in 2014.

The Bank has also maintained its strong credit rating just as it was recently accorded AAA long-term rating by Fitch Ratings. What is the secret behind this success and how has it helped the AfDB to achieve its mission?

The key rating drivers underpinning the AfDB’s AAA long-term rating by Fitch (and indeed by all the other major rating agencies) are the strength of its intrinsic credit profile and the strong support from its 80-member countries.  The strength of the intrinsic credit profile is largely due to prudent financial management, sound capital adequacy, strong liquidity profile and an enhanced risk management framework, despite the challenging environment in which the Bank operates.

African economies are grappling with rock-bottom commodity prices.  How can African countries lop off this tentacle?

In the short to medium-term African countries will continue to remain vulnerable to the commodities cycle until more substantial efforts are made to help diversify the economies particularly for resource rich countries. Such diversification could be achieved by adopting policies and strategies that promote beneficiation and value addition of those key commodities produced domestically. Other mechanisms include diversifying economies away from primary commodities and into services industries and other sectors such as tourism. We are already seeing some of these changes taking place with more investments starting to flow into non-resource sectors of African economies.

How is the Bank helping the economies of Africa to withstand the current prolonged slump in the international commodity market?

The Bank continues to play its counter-cyclical role through budget support to countries during such periods. But the longer-term response is in the form of policy reform to help countries build diversified economies and become less vulnerable to commodity price shocks.  This includes support to assist countries to scale up infrastructure development in the form of increased energy supply and expanded road networks. The Bank is also intensifying its assistance on the transformation of agriculture to spur economic growth, fight malnutrition and poverty.

What is the medium-term outlook for the Bank’s financials?

The medium-term outlook for the Bank’s financials remain very sound, especially following its last capital increase that took place in 2010, and as evidenced by the AAA rating confirmation of all rating agencies. Indeed, the Bank implements very conservative financial management policies with its Net Interest margin expected to remain stable and a prudent capital adequacy policy that ensure the availability of capital for the medium term.