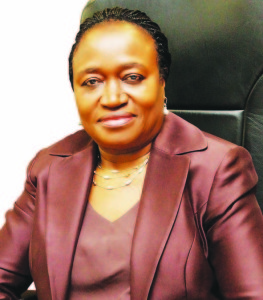 Intense and brilliant in an understated way, Dr Sarah Alade is a prime role model of Nigerian female bankers and other aspiring young policy makers.  As the first female acting Governor of the Central Bank of Nigeria (CBN), Dr Alade has all but achieved every banker’s dream and scored many firsts.  She is the first person from the North Central geo-political zone of Nigeria to attain the position of Governor of CBN, and the first woman in the country to hold such commanding position. She was appointed acting head of the apex bank on February 20, 2014 after Sanusi Lamido Sanusi left the position.

Dr Alade proved her mettle in the months she held sway as apex bank boss, fulfilling the Bank’s primary mandate of ensuring price and financial system stability. Throughout the period she piloted the affairs of the Nigerian apex monetary authority, the foreign exchange markets were calm and the naira (the local currency) exchange rate was generally stable.

As she winds down her tour of duty at the Central Bank, Dr Alade would look back with pride that for ten years she was at the heart of economic policy formulation in Nigeria. The quintessential central banker essentially avoided soft or non-core departments that are generally reserved for women in Africa.  She spent her entire career so far in the bank between Operations, Research and Monetary Policy departments.  In fact, she spent the last nine years as Deputy Governor in-charge of economic policy, which supervises the thinking departments in the bank. This entrusts her with the responsibility of playing a key role in achieving the core mandate of the Bank and conducting its affairs “with greater professionalism, prudence and propriety to restore domestic and international confidence in the country’s apex bank.”

Dr Alade’s leadership qualities and managerial acumen have been largely shaped by her academic-cum-professional background. She earned her first degree in Economics from the University of Ife, (now Obafemi Awolowo University) Ile-Ife, Osun State in 1976 before proceeding to the University of Melbourne, Australia in 1983 for her Master of Commerce programme. With that in the kitty, Alade went on to get a PhD in Management Science (Operations Research) at the University of Ilorin in 1991.

Her working career began in 1977 with the Ministry of Finance and Economic Development, Ilorin, Kwara State.  Attracted to teaching, she crossed over to the University of Ilorin where she lectured in the Department of Accounting and Finance between 1991 and 1993.   Dr Alade later proceeded to the CBN in 1993 as an Assistant Director in the Research Department and was successfully Head, State Government Finance Office (1993-1996); Head, Federal Government Finance Office (1996-2000) and Head, Fiscal Analysis Division (2000-2004). Thereafter, she rose to the post of Director, Banking Operations Department in May 2004.

Before being appointed acting governor of the CBN, Dr Alade had been serving as Deputy Governor (Economic Policy) since March 26, 2007. She equally was on the committees of major economic policy studies and had been involved in the preparation of CBN’s Monetary and Credit Policy Proposals for many years.

A member of the Nigerian Economic Society (NES) and fellow of the Nigerian Institute of Operational Research, Dr Alade has several publications to her credit and consistently conducts research into Interest Rate Policy and Monetary Policy Implementation in Nigeria.

Indeed, Dr Alade’s achievements in the financial sector are innumerable and inspiring, which explain why some refer to her as the Amazon of Nigerian central banking system.