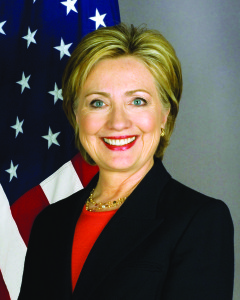 With the 2016 Presidential election ticking in her favour and Mr Donald Trump’s unrelenting misbehaviour, Mrs Hillary Clinton is on the threshold of being elected the very first female President of the United States.  Since it is not a crime to support Mrs Clinton on account of her gender, we endorse her partly on that score, partly also because of the trepidation about a Trump presidency but mostly because she is eminently qualified.

President Barack Obama captured her essence best when he confidently declared that “there has never been a man or woman, not me, not Bill, nobody, more qualified than Hillary Clinton to serve as President of the United States of America”. Many have argued that but for her gender, Mrs Clinton probably would have been president even before her husband and Obama.  She is a good human being.  Even her most trenchant traducers agree that she is a great daughter to her parents and has been a wonderful mother to Chelsea and her young family.  But her defining moment came as a supportive wife to her husband during the most trying period of his presidency.  Only those who do not appreciate the real meaning of marriage (for better, for worse) will expect less from this amazon. Perhaps this explains why forty years of relentless distortion of her character by a right wing coalition, has  left a dent but no serious damage to her record of life-long public service to humanity.

Her work for the child, support to women and defense of the vulnerable everywhere are testaments to who she truly is.  Perhaps the easiest way to judge Mrs Clinton is to examine how she acquitted herself in the various positions she has held — First Lady, Senator and Secretary of State! Any fair jury would be kind to her as were the famous New York Times, Houston Chronicle, The Enquirer, Dallas Morning News, and many more.  Not one credible news medium has yet endorsed her main opponent.

Mr Trump’s isolationist proposals are injurious to US interests at home and abroad.  It is elementary economics that in an open commercial warfare, the stronger and better equipped combatant always come out on top.  The United States of America is till the strongest and the most cherished country on earth.  Could it be that the US has led the world so long that some of its citizens are beginning to take the benefits that come with that leadership for granted?  Russia and China are just two of many countries that would do anything to be in the US’s current leadership position. The question is: do they have the right qualities and temperament to lead the world?

So, every US citizen who cherishes inclusive growth, international peace and security and America’s sustained global leadership of the world must go out and vote for the only candidate, in this race, who is prepared for the demands of the White House – Mrs Hillary Clinton.