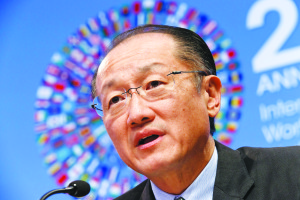 If the dream of ending extreme poverty by 2030 is to come true, there should be unwavering focus on reducing inequality, says Dr Jim Yong Kim, President of the World Bank Group.

Dr Kim is confident that the world can overcome the numerous challenges weighing on growth as long as “we face each global challenge with an urgency and scale commensurate to the problem”. He worries that multiple risks threaten to undo hard-fought gains in many countries which could hamper progress on the goals of ending extreme poverty.

China, he says, is central to achieving the goal of reducing extreme poverty having successfully pulled over 700 million people out of lack in three decades. The country was able to do this by engaging in trade and remaining an open economy while decrying the protectionist sentiments gradually enveloping the world.

On Africa, the Bank President says he is not worried about the continent’s debt level, which has not reached a crisis level. Many countries in Africa have debt to GDP ratio of less than 50 percent. The World Bank is therefore focused on creating assets class that can attract private finance but cautions against a one-size-fits-all approach due to variation in regulatory and policy regimes. To this end, the Bank is partnering with China to create assets class in Africa such as in infrastructure. It is currently working with the Chinese sponsored Asian Infrastructure Investment Bank (AIIB) on projects in Indonesia.

Dr Kim notes that Africa’s growth prospects are negative when compared with population growth. Growth on the continent could, however, be lifted if there are investments to bridge the huge gap in infrastructure such as in energy and roads. “We have to find ways of de-risking the investments in a way that will work,” he says.