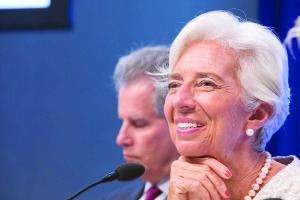 International Monetary Fund (IMF) boss Christine Lagarde says she is done with just preaching the three-pronged approach to getting the sluggish global economy to step on the gas a little harder and move past the “New Normal”.  She vows to tell policy makers of member-countries of the IMF today, two important words:  “Action, please.”

And it is about time too. The Fund forecasts global growth at 3.1 per cent for this year, rising marginally to 3.4 per cent in 2017. Too low, all analysts and experts agree, to lift as many people as the world wants out of poverty or fix the income inequality problem bothering economists the world over. The IMF has been pushing a fine blend of fiscal, monetary and structural policies by countries to move the global economy out of the so-called “New Normal” or what Lagarde characterises as the “new mediocre”.

Panelists at the Fiscal Policy in the New Normal, a flagship seminar at the IMF/World Bank meetings also demand action from policy makers.  Everyone is fed up with growing inequality and high debt bogging down the global economy and causing the extension of injurious unconventional monetary policies such as negative or zero policy rates.

Fiscal policy to the rescue.  Monetary policy has had its day and all agree that central banks have since 2007 been effective in keeping the global financial system, by extension the global economy, from total collapse.  Unfortunately, monetary policy is now stretched to the limit.

Bill Morneau, Canada’s Finance Minister, wants policy-makers to think about the long-term advantages to the people when using available fiscal space to tackle growth issues.  His country’s fiscal authorities favour infrastructural investments that affect the people’s daily lives such as housing, child benefits and the like.  He believes countries can succeed if administrators earn the people’s confidence through the right attitude, political will and the people’s understanding.

Chief Economist at Germany’s Finance Ministry, Ludger Schuknecht says his government prefers deploying “automatic stabilizers” to countercyclical policies”.  He emphasizes the need to prioritise spending.  Germany, he notes, has a sizable fiscal space but is cautious because of such future liabilities as aging populations.  Mitsuhiro Furusawa, IMF Deputy Managing Director, warns that fiscal space must be assessed in the context of the room for discretionary spending.  Japan, he says, has a huge debt burden of 150 percent of GDP and really does not have much fiscal space, so must consider the quality of stimulus it employs.

India has a different experience, and that is true of some emerging economies.  Arvind Subramanian, Chief Economic Advisor, Government of India says his country does not suffer slow growth, high debt and zero-low interest rate.  He, however, notes that the effects of the “new normal” experience reverberates around the globe.  India, he says, is undertaking tax reforms with new goods and services tax.  The country is also trying to crowd-in private investment to complement government’s efforts.  He advocates quality spending involving targeted subsidies for food, fuel and other social sector interventions. Subramanian fingers widespread suspicion of government in advanced countries as the reason public investment is continually sliding.

The panellists and Lagarde are on the same page.  Fiscal policy must come to the rescue.  Its affinity with monetary policy is undeniable.  It must also align with structural reforms, for instance, by offering unemployment benefits in economies that liberalise hitherto rigid labour markets.  That really would be taking action, indeed.