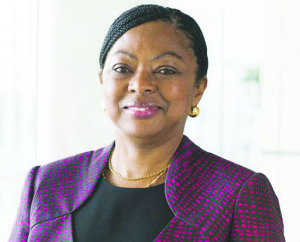 She has almost seen it all. Ana Afonso Dias Lourenco, Executive Director of the Board of the World Bank Group (WBG), representing Angola, Nigeria and South Africa, belongs to the elite league of African women who have distinguished themselves in the global development arena. Her meteoric rise to the top is the result of a combination of factors: hard work, a good nose for opportunities, a striving for excellence and an eye for the future.

The Angolan-born technocrat succeeded Nigeria’s Mansur Muhtar who also served as the Vice Chair of WBG Board’s Ethics Committee and on the Human Resources Committee (HRC) for 2014-2015. The committee which Lourenco co-chairs performs the crucial task of strengthening the efficiency and effectiveness of the board in discharging their oversight responsibility on WBG’s Human Resources strategy, policies and practices, and aligning the business needs of the organisation.

Before joining the Bretton Woods institution in 2012 as Alternate Executive Director, Lourenco held several top government positions in her country between 1997 and 2012 where she distinguished herself as a thoroughbred development expert and visionary leader.  She had served meritoriously at various times as Minister of Planning of Angola; President of the National Council of Statistics, President of SADC’s National Commission, National Coordinator of the FED Fund, Angola’s Governor for the World Bank and African Development Bank (AfDB) and Member of the Government’s Economic Cabinet.

She is well known for her role in the economic revival of Angola between 1986 and 1997 when she served as Senior Advisor, Provincial Planning Cabinet, Benguela, the Head of Investments Department, Ministry of Planning as well as the National Director, Investment Department.

A graduate of the University of Agostinho Neto, Luanda, with specialisation in Macroeconomic Policy and Management, Lourenco’s over three decades of experience in economic development has equipped her to contribute in the noble task of laying out Africa’s socio-economic development trajectory.

African oil-exporting countries (of which Angola and Nigeria  are prominent) have suffered unprecedented revenue losses and weakening fiscal and external reserves since oil prices took a tumble in 2014, following a four-year period of stability.

As the representative of these three, resource-endowed, but economically challenged countries at the World Bank, Lourenco work is at cut out to enhance the World Bank Group’s development assistance to her constituency in a post-resource propelled economy.

In her native Angola, Lourenco leads a team focused on implementing the IBRD/IDA/IFC/MIGA Country Partnership Strategy (CPS) for 2014-2016 Fiscal Years to support the transition to a full-fledged middle-income country. The strategy was designed to fast-track Angola’s economic diversification, improve service delivery and social protection, and put in place measures to absorb external shocks such as the commodity price crash.

Lourenco and her team are also helping Nigeria to actualize the Vision 20:2020 and economic diversification agenda. The Bank’s Country Partnership Strategy (CPS) 2014-2017 for Nigeria revolves around three strategic clusters namely: the federally-led structural reform agenda for growth and jobs, quality and efficiency of social service delivery at state levels and governance and public sector management.

For South Africa, the main task is to assist the country to achieve its vision of reducing inequality and promoting investment.