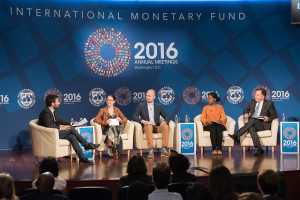 The youths of the world have been admonished to fight corruption through the formation of broader and stronger global coalitions. The admonition was made by the panel of discussants on a seminar on “Youth Dialogue: The Cost of Corruption,” at the ongoing annual meetings of the IMF/World Bank.

According to her, the cost of corruption is not limited to monetary impacts. Grasso noted that other implications of corruption include low growth and greater income inequality. She added that corruption has a broader corrosive impact on society and undermines trust in government. It also erodes the ethical standards of private citizens. Specifically, corruption can have a significant impact on the youth, as it can negatively affect their employment opportunities and hamper their access to basic service, including education; hence child mortality rate is almost twice as high in countries with high corruption “Corruption is a hindrance to economic growth at a significant social cost. It also entrenches poverty and inequality by lowering spending on education and health. It disproportionately affects the poor who rely more on social services,” Grasso said.

Sean Hagan, general counsel and director of the Legal Department of IMF, identified the strengthening the rule of law and its institutions, increasing transparency more globally, and evolution of strong leadership that can instil cultural values as key solutions to the fight against corruption. Hagan believes that the youth can use social media to fight corruption.