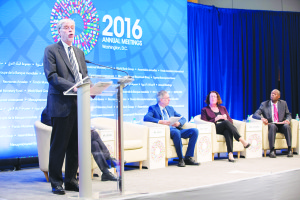 For low income countries facing dwindling resources in the wake of commodities price crash, now is the time to reform taxes. This is particularly true of those reliant on the extractive industries, experts at the International Taxation and the Extractive Industries seminar say.

IMF Deputy Managing Director, Tao Zhang says resource-rich Low-Income-Countries (LICs) are facing budgetary pressures which could threaten their ability to meet the Sustainable Development Goals (SDGs). Many resource-rich LICs, he charges are undermined by tax planning schemes of multinational corporations designed to reduce revenues accruing to LICs. It is increasingly clear that the world has run out of patience with such tax shopping tactics. The OECD has moved against the so called “Base Erosion and Profit Shifting (BEPS)” of multinationals and it is moving into implementation stage, Tao confirms.

Multinational corporations are dominant, according to Michael Keen, Deputy Director of the IMF Fiscal Affairs department, because there is a mismatch between where extractive resources exist and where the demand is located.  About 30 percent of revenue is lost in LICs due to multinational tax avoidance schemes made possible by lack of alignment between tax treaties and national tax policies. Low commodities prices, he reckons, make tax reforms imperative.