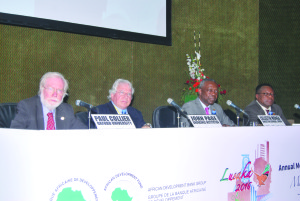 China, the East Asian industrial behemoth, indisputably holds the right to that grand title today. The question mark, of course, hints that the headline borders on wishful thinking. But that did not stop the conveners of the eponymous talk shop at this year’s AfDB meetings dreaming of the time Africa would proudly qualify to be so regarded.

Africa’s long march to industrialisation can become a reality if it ramps up investments that boost productivity, according to experts that sat in judgment over the status of the continent’s industrialisation effort at the seminar.

Professor Paul Collier, Director of the International Growth Centre set the stage by highlighting the platforms that enhance productivity to include building teams, creating networks and investing in education and key infrastructure that improve spatial connectedness. “Urbanisation is a necessary but not sufficient condition that enables teams to be productive. Policies to manage urban space are important to the productivity of teams” he said.

Highly connected cities, he said, bring workers, consumers and firms together. To march out of poverty, Africa, in his opinion must build highly-connected cities with transport links and affordable housing to produce the population density large firms need to thrive.

Brookings Institute’s Dr John Page would have Africa change its poor industrialisation narrative, by shifting to a growth model that raises productivity and engages structural transformation. He identified lack of capable mid-sized firms employing between 50 and 70 people as the reason for the low connectivity of firms within the continent. Africa stands the chance of breaking into the global market for goods, in his view, if that drawback is fixed.

His recipe for rising productivity: export bias, competition, firm capabilities and regional integration which will reduce land-locked countries’ cost of interacting with global markets. Poignantly, Dr Page reiterates what has long been known to all development experts on the continent’s potential: the best policies and industrial strategies will fail in the absence of committed leadership.

United Nations Industrial Development Organisation’s Managing Director Celestin Monga cautioned on the need to beware of industrial strategies peddled by free market fundamentalists. Waving off their thesis, he debunked analysts’ claims that Africa can leapfrog manufacturing to services. “Africa can’t jump from agriculture to services. It is lunacy to think it can jump manufacturing,” he said.

Stressing the need to increase productivity, he rejects the notion that productivity and industrialisation can only be generated in highly complex activities. “If you do that, a lot of people in countries with low skill base will be jobless”, he cautioned. There is no shame, he reasoned, in developing industrial strategies that focus on simple, low skill, labour intensive sectors and industries. The outspoken technocrat has nothing against the clamour for more education. He however quarrels with the current practice of investing billions of dollars in the training of bright minds only for them to emigrate to economies that can absorb and make use of their skills, thereby helping the job creation drive the developed countries, to Africa’s detriment.

Professor Emmanuel Nnadozie, Executive Secretary of the African Capacity Building Foundation (ACBF) lamented experts’ notion that industrialisation is purely a matter of economics without recognizing the political dimension. Africa, he said, must decide whether and how it wants to industrialise, and thereby called on countries to develop strategies and policies based on their realities. “There is no one-size-fits-all industrial strategy”, he insisted.

Africa’s disheartening 50 engineers-to-one million people ratio compared to the United States’ 2000-to-one million, thoroughly irks the professor of economics. The state, Nnadozie asserted, needs to play an active role either as player or coordinator. The unending but unnecessary debates between promoters of the free market model and the state-led models of development have only served to slow down Africa’s industrialisation, he concluded.